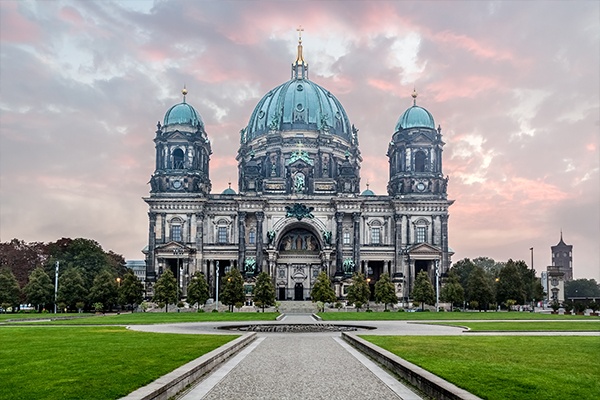 Modern Berlin is a relatively new city because so many of its finest treasures were bombed out in World War II. That doesn’t mean, however, that there isn’t any history scattered throughout this German capital. While the Berlin Wall may no longer stand, reminders of it are all around—from Checkpoint Charlie to the Brandenburg Gate, the Palace of Tears to the remaining sections of the Wall itself. Discover the proud remnants of Germany’s past and the ever-evolving designs of its post-modern future. Here are the top 10 things to see in today’s Berlin:

1. Reichstag—This Neo-Renaissance building laid dormant for years on the Mauerstreifen, the military zone between the Wall’s two sides. Since then, the building has been completely modernized and its massive glass dome is now an icon of the city skyline.

2. Brandenburg Gate—Built in 1791, it is one of the city’s signature attractions. During the French occupation, Napoleon had the gate dismantled and taken to Paris. When it was returned home in 1814 it became a symbol of German pride.

3. Fernsehturm—This television tower defines the skyline as it the tallest structure in the city. It offers visitors 360-degree views of Berlin.

4. Gendarmenmarkt—This large square is nestled in the Friedrichstadt-passagen, a complex made up of luxury shops, restaurants and the city’s poshest addresses. Also ringing the square are the Concert House and the German and French Cathedrals (the Deutscher Dom and the Französischer Dom).

5. Berlin Cathedral—Berliner Dom is an excellent example of 19th century architecture with a soaring dome, a spectacular organ and ornate stained-glass windows.

6. Kurfuerstendamm—Arguably the most expensive in Berlin, this street is home to exclusive brands, sought after shops, and Europe’s largest department store, KaDeWe.

7. Zoologischer Garten—Germany’s oldest zoo is home to 16,000 animals and is one of the world’s largest. It was rebuilt bigger and better after it was completely destroyed in World War II.

9. Museum Island—This long island is the cradle of Berlin’s history, and home to an impressive collection of museums that trace more than 6,000 years of art and cultural history. It is a UNESCO World Heritage site that displays everything from the Ishtar Gate of ancient Babylon to a bust of Queen Nefertiti.

10. The Berlin Wall Memorial and Documentation Center—This memorial marks a tribute to the 180 people shot trying to cross the Wall before the Cold War ended in 1989. It includes a surviving section of the Wall and a watchtower that allows visitors to get a feel for daily life in the once-divided city of Berlin.

Visit Berlin on the YMT Vacations Romance on the Rhine and Moselle Tour. This 13-day river cruise takes you throughout the Rhine Valley, to the vineyard slopes of the Moselle Valley, and on to Berlin and Dresden. For information, call your travel agent or YMT Vacations at 1-888-756-9072.