Many of Australia’s most famous animals could certainly be considered “quirky.” Their unique adaptations make them perfect for surviving on the isolated land mass, and the opportunity to see them in person is well worth the long flight.

The giant jumping kangaroo, the cantankerous Tasmanian devil, and the monstrous saltwater crocodile are just a few of the fascinating creatures to look for in the Land Down Under. Whether at the zoo or in the wild, keep your eyes peeled for these ten exotic animals on your Australian adventure. 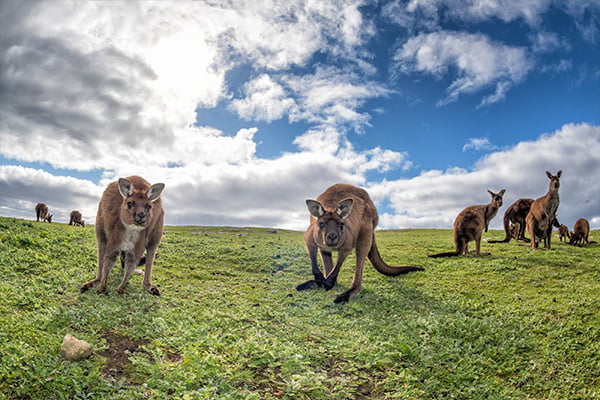 200 pounds of pure muscle and bounce, kangaroos are some of the most powerful jumpers in the world. Standing over six feet tall, they have large, strong hind legs that enable them to travel at more than 30 mph through Australia’s rugged terrain. Their diet consists of grasses, shrubs, and flowers. They graze in groups, or mobs, of up to 50 individual ‘roos.

Kangaroo mobs carefully maintain their complex social hierarchy in the most Australian of ways: ferocious kickboxing matches. First circling their opponent, they scratch, punch, and slap. Finally, they lean back on their tails to kick the living daylights out of each other.

Male and female kangaroos alike learn to spar from a young age. As adults they fight for dominance, the chance to mate, and even just for the most comfortable place to nap. 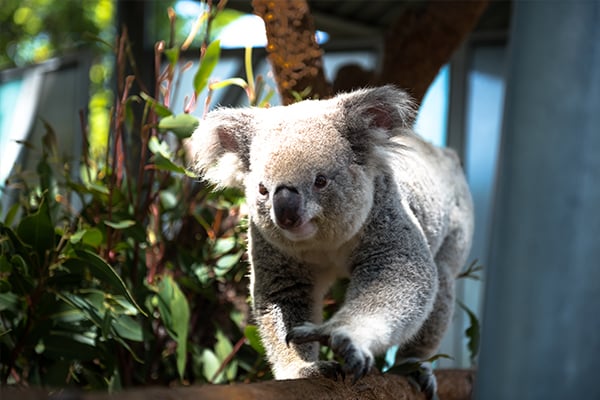 Teddy bears come to life, koalas are adored in Australia and across the world.

Fluffy, chubby, with round ears and a spoon-shaped nose, these tree-dwelling marsupials are about the same size as toddlers. Their diet consists almost entirely of eucalyptus. It is low in nutrients and provides such little energy that koalas spend 20 hours a day napping.

You’re most likely to see a wild koala high up in a eucalyptus tree, fast asleep. They often sleep flat on their stomach, stretched over sturdy branches with their paws splayed out around them. 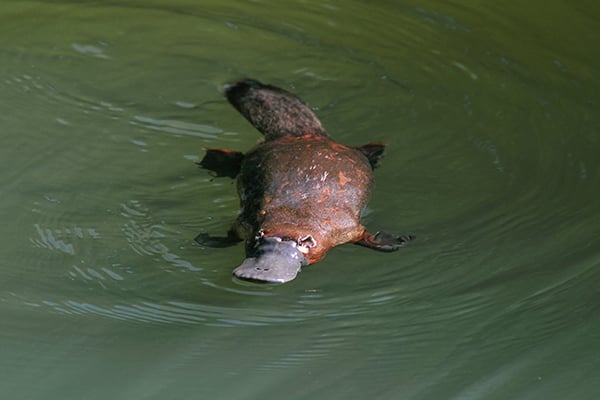 You will never make sense of a duck billed platypus, the world’s only egg-laying mammal. They have no close living relatives, but seem like a random mishmash of other, more familiar animals. They have the head of a duck, the body of an otter, the tail of a beaver, and sharp, venomous spurs.

The semi-aquatic hybrids spend their time taking naps and eating up to 20 percent of their body weight each day. This requires countless trips to the bottom of murky lakes and billabongs in search of the tasty insects and worms that await them in the muck. 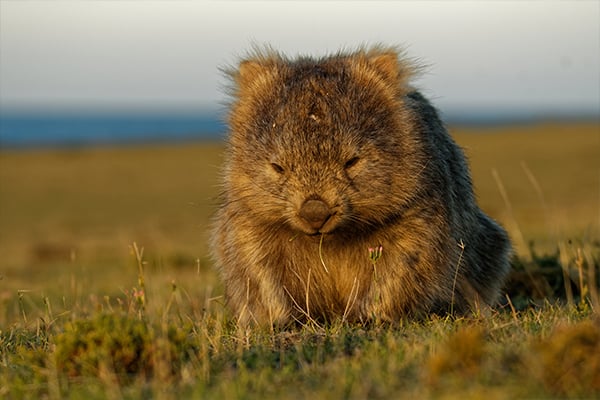 Wombats are large, round, short-legged marsupials. They rarely appear above ground except to graze at dawn and dusk. But despite their humble appearance, wombats are tough. Their muscular legs and long claws make them incredible diggers. Wombat burrows can extend for hundreds of feet, with complex tunnels and numerous chambers.

When threatened, the wombat’s signature waddle turns into a sprint, they can run up to 25 mph. They flee toward their burrow, diving in headfirst and blocking the entrance with their perfectly round backside.

Covered in fur and thick skin, this armored rump is safe from bites and scratches. And when the famously disagreeable 80-pound creature goes on the offensive, watch out. A wombat will bite, maul, or over bowl over a perceived a threat.

The kid cousins of kangaroos, wallabies look so much like smaller versions of the iconic marsupial that many people struggle to tell them apart. But there are clear distinctions between kangaroos and the over 30 different species of wallabies. Their size is the most obvious difference. The biggest wallaby tips the scales at 44 pounds, while the tiny dwarf wallaby is barely two pounds.

The most popular species of wallaby is inarguably the jolly quokka. Tubby and friendly, they have fluffy fur, rounded ears, and the animal world’s most infectious smile. Visitors to Western Australia, particularly to Rottnest Island, have turned “quokka selfies” into the ultimate souvenir. 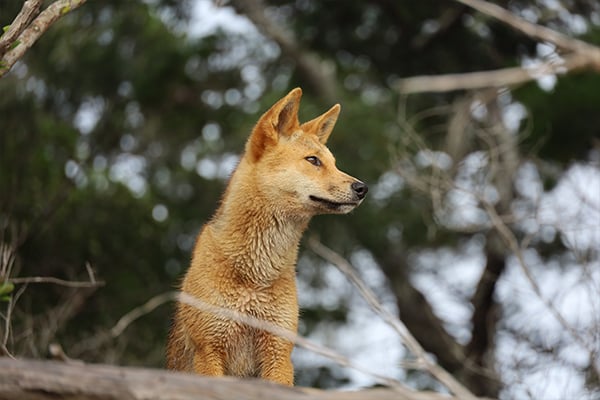 Dingoes, Australia’s wild dogs, are the clever, cautious descendants of imported Indian wolves. Over 4,000 years, they have adapted to the often-challenging landscape of their adopted homeland. Sandy-colored and thin, they hunt at night for prey including birds, bats, wombats, and snakes.

Dingoes are considered feral dogs who prefer to avoid humans, or at least remain on the fringes of society. Too much encroachment on either side can lead to disastrous results. From attacks on livestock to the infamous disappearance of baby Azaria Chamberlain in 1980.

The flightless emu is Australia’s bulkiest bird, reaching a height of over six feet and weighing up to 130 pounds. With their long necks, kind brown eyes, and dinosaur-like feet, they make for a striking sight galloping through the bush at 30 mph. But it’s the emu’s interpersonal relationships that make them truly unique.

The males, the smaller of the species, are the nest builders and caregivers. After courting the male, the female lays her dark blue eggs and leaves. The male then incubates the eggs, barely moving for two months. After the eggs finally hatch, the male rears the young for another six months to a year. Once abandoned by his brood, the male will hope to be courted again.

Crikey! Saltwater crocs are found in the rivers, lakes, and brackish ponds of Australia’s rugged north. Weighing up to 2,200 pounds and stretching to up to 23 feet in length, “salties” are the largest, strongest reptile in the world.

Highly territorial, silent, and shockingly fast, they nab crabs, birds, and anything else that wanders too close to the edge of the water. Prey can even include humans. These living dinosaurs have existed for over 240 million years, far longer than the actual dinosaurs they so closely resemble. 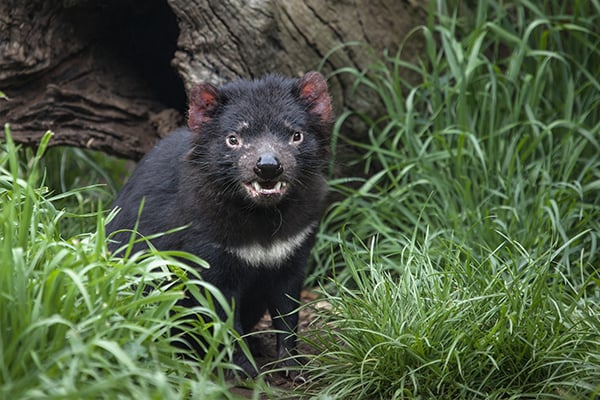 The Tasmanian devil’s vicious reputation is well earned. Muscular, stocky, and stinky, the world’s largest carnivorous marsupial is the size of a small dog.

They have long claws, a tremendously powerful bite, and a bloodcurdling scream. All valuable tools to use in their frequent skirmishes with one another over food, territory, and the opportunity to breed. 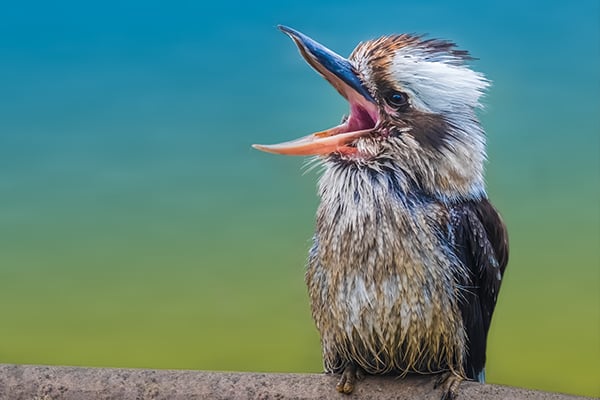 Known as the merry king of the bush, kookaburras are highly social and extremely vocal members of the kingfisher family. They are native to eucalyptus forests but have adapted to modern life and can now be found across Australia.

Up to 18” tall, they are master hunters who wait in near stillness and then snap at prey ranging from small rodents to insects and snakes. Kookaburras mate for life, and young kookaburras often remain with their family unit for years to help raise future generations.

The animals are just one reason to visit Australia. You’ll also see diverse landscapes like the stark outback, the lush Daintree rainforest, the breathtaking Great Barrier Reef, and miles of sunny beaches. Australia’s stunning natural beauty provides the ultimate break from the everyday.

If you want to take your bucket list Australian vacation, sign up for one of YMT’s incredible guided tours. Call your travel consultant or YMT Vacations at 1-888-756-9072 to enjoy Australia’s animals, nature, cultural highlights, and more.