Cat got your tongue? You might want to stop in at Blarney Castle. 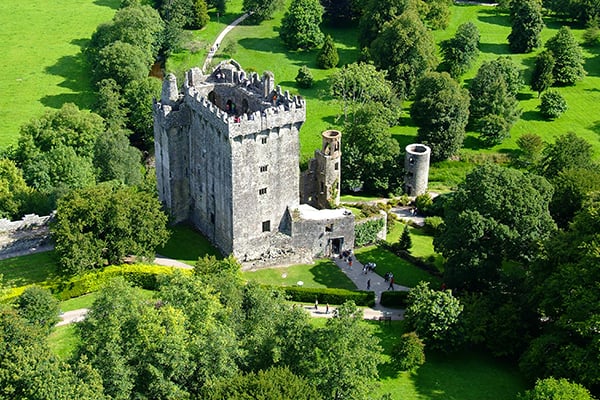 Walk up to Blarney Castle and you sense the captivating richness of Irish history. The castle is a medieval stronghold near Cork, and the current structure was built by the MacCarthy of Muskerry dynasty.

The Blarney Castle history dates from 1200,when a wooden structure was built, then later replaced by a stone fortification, which is now a partial ruin with some accessible rooms and battlements. The castle was occupied at one time by Cormac MacCarthy, King of Munster, who is said to have supplied four thousand men to supplement the forces of Robert the Bruce at the Scottish battle of Bannockburn in 1314.  (Yes, Cormac McCarthy is also the name of the American novelist awarded the Pulitzer Prize for “The Road.”) One legend has it that Robert the Bruce gave half of the Stone of Scone to McCarthy in gratitude for his support.

While this is a very romantic and believable story, the Stone of Scone is actually red sandstone, while the Blarney Stone is bluestone, which puts this story to rest. The stone was incorporated into the battlements of the castle and called the “Stone of Eloquence.” It is said that with a kiss, Blarney Stone bestows the “Gift of the Gab.”

One story has it that Cormac McCarthy was involved in a lawsuit and appealed to the goddess Cliodhna, who told him to kiss the first stone he found in the morning on the way to court. He did so, with the result that he pleaded his case with great eloquence and won. Thus the Blarney Stone is said to impart “the ability to deceive without offending.” The powers of the stone are unquestioned, but the Blarney Stone legend still creates debate.

Some say it was Jacob’s Pillow, brought to Ireland by the prophet Jeremiah, where it became the Lia Fail or “Fatal Stone,” used as an oracular throne of Irish kings. It is also said to be the deathbed pillow of St. Columba on the island of Iona. Others say it may be a stone brought back from the Crusades – the “Stone of Ezel” behind which David hid on Jonathan’s advice when he fled from his enemy Saul. A few claim it was the stone that gushed water when struck by Moses.

Without a doubt the Blarney Stone history is rich with interesting legends. If visitors choose, they can climb the 125 steps of the spiral staircase, then hang upside-down over a sheer drop to kiss the Blarney Stone. To touch the stone with one’s lips, the participant must lean backward on the parapet’s edge. Evidently the gift of gab is not bestowed lightly!

From the top of the castle, you can take in the wonderful views of over 60 acres of sprawling parklands which include gardens, avenues, arboretums and waterways. The gardens of Blarney Castle are well worth a visit, inviting a journey through tranquil surroundings, to mystical and magical places. Enjoy natural rock formations with fanciful names like Druid’s Circle and Witch’s Cave. “I loved just having the free run of the place – wandering in and out of the various gardens was the highlight of the trip,” said one visitor. The Wishing Steps legend says if one can walk backwards down and back up these steps with closed eyes and without stopping for one moment to think of anything other than a wish, then that wish will come true within a year.

Experience the history of Blarney Castle as part of the YMT Vacations Best of Ireland tour, and you’ll never forget your time spent there. For more details of the tour, call 1-800-816-9752 and speak to one of our friendly travel consultants