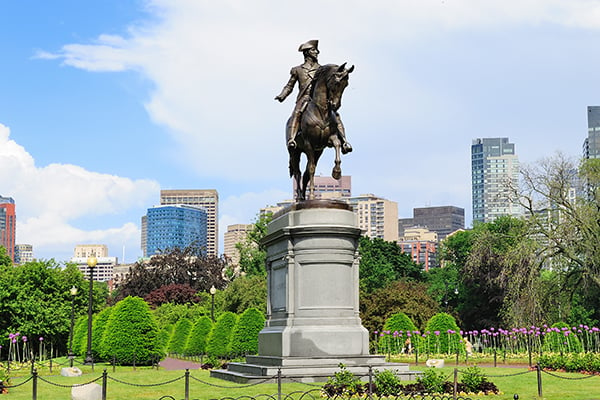 The Freedom Trail contains some of Boston’s richest history. It is a 2.5 mile walking path marked by a red line that snakes past 16 historically significant sites that typically takes about two hours to complete.

The American Revolution happened in large part because of the political powder keg that was Boston, the Freedom Trail in particular, in the late 1700s.

Brilliant minds like Benjamin Franklin, Samuel Adams, and Paul Revere came together and united with their neighbors – simple farmers, bakers, and shopkeepers – against the tyranny of Britain. They created an unstoppable force; the concept of America, with all the independent ideals that would go on to unify 13 rural colonies into what would become one of the greatest countries in human history.

From Boston Common to the USS Constitution and Bunker Hill, the Freedom Trail walk is a vivid living history experience that helps visitors trace the evolution of the United States of America.

Stand close to the 18th-century-clad Freedom Trail Players as they share tales of high treason and secret conspiracies, and bring the story of our nation to life.  There are guided tours of the trail available or you can follow the trail yourself for free. You can start and end where you like – you certainly have the freedom to enjoy the trail however you enjoy its historic sites as you see fit.

The 16 Stops on the Freedom Trail Walking Tour

Follow the path of history through the narrow city streets of this bustling modern American city, where you can’t help but imagine what life was like during the turbulent years of the Revolution. See the Freedom Trail website to learn more!

America’s oldest public park, dating back to 1634, has been the site of a lot more than just leisurely family picnics. It was once the site of public hangings, and was occupied by the British for 8 years as a Revolution-era encampment for its soldiers.

The seat of the state’s government since it was opened in 1798.

Constructed on top of the Boston granary, Park Street church was built and attended by numerous Revolutionary War heroes.

One of New England’s oldest cemeteries. Look for the tombstones of Paul Revere and Samuel Adams, among other heroes of the Revolution!

Built as Boston’s first Anglican church in 1686, George Washington often visited when he was in town. The church bell was cast by Paul Revere and is still in use today.

Downtown Boston’s oldest commercial building was once home to the publisher of Thoreau’s Walden, Hawthorne’s The Scarlet Letter, Longfellow's Midnight Ride of Paul Revere. It is currently home to a Chipotle.

The hall where countless debates took place over whether the Colonies would pursue self-governance or stay under British rule.

Site of the Boston Massacre

The spot where five Bostonians were killed by Redcoats on March 5, 1770. The Boston Massacre is considered one of the most significant events in early American history, as it turned the tide in colonial sentiment toward independence.

Nicknamed “the home of free speech,” Faneuil Hall was the site of America’s first town meeting.

The church where Paul Revere’s lit lanterns, “One if by land, two if by sea,” communicated the Redcoats’ intentions.

A gorgeous old cemetery whose height and panoramic views led the British to use it as a staging area for its cannons during the Battle of Bunker Hill.

The site of the first major battle of the American Revolution.

The Freedom Trail one of the best ways to experience Boston, and is just one of many stunning stops on YMT Vacations’ Autumn Leaves Tour. To experience the best of American history during New England’s breathtaking fall season, call your travel professional or YMT Vacations at 1-888-756-9072 to book!