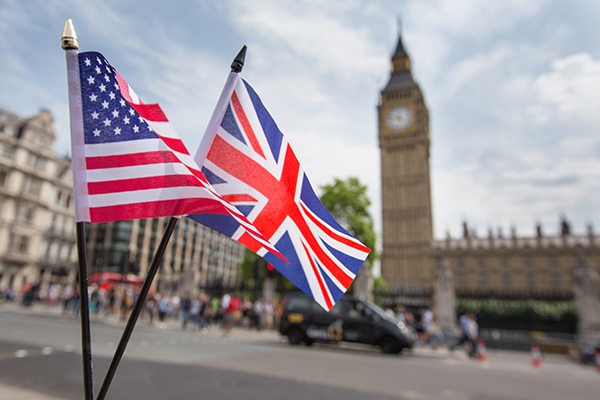 While Americans and Brits technically speak the same language, all it takes is five minutes down the local to realize that theirs is a very different form of English. From insults to compliments, technical talk to slang, there’s plenty to confound those of us from across the pond. Learn how to navigate this foreign land with just a few common British English words and phrases:

Hungry Americans traveling in Britain might feel a bit like Alice in Wonderland. What’s up is down, what’s down is up. Fries are chips, chips are crisps, cookies are biscuits, and cake is pudding. This guide will help you keep your wits during mealtimes:

Brits love nothing more than chatting to strangers about the weather. If it’s the normal gray and drizzly, they’ll have plenty of say. And if it’s sunny, they’ll talk about nothing else!

The UK and America are two nations divided by a common language. They say po-tay-toe, we say po-tah-toe. They say Jam Sandwich, we say police car. Here are some helpful direct synonyms:

British Nicknames for Cities and Countries

Brits love a good nickname, including places around the UK. You can avoid looking like a bumbling tourist when you hear these words out in the wild. Just nod your head and agree that, aye, The Dubs is beautiful this time of year.

The British are not afraid of hurting your feelings—but their insults are so colorful that you somehow don’t mind. The land of Shakespeare, Oscar Wilde, and Winston Churchill is known for its dry wit and vicious putdowns. Here are just a few of the biting terms you might overhear:

Some British sayings and words simply don’t translate. Having a chinwag outside of Brittania? Pish posh, mate! Wouldnae happen! Here are just a few of our favorite odds and sods of British words and phrases:

Try out your best British slang on a YMT Vacations tour of England, Wales, Scotland, or Ireland will give you plenty of chances to use these new British words and phrases around people who will understand them.

Visit castles, explore swingin’ London, walk the Scottish moors, or go down the pub in a tiny Irish village. These tours offer an unforgettable cultural immersion into these scenic, historical, and friendly countries sitting just across the pond. To join us, call your travel agent or YMT Vacations at 1-888-756-9072.