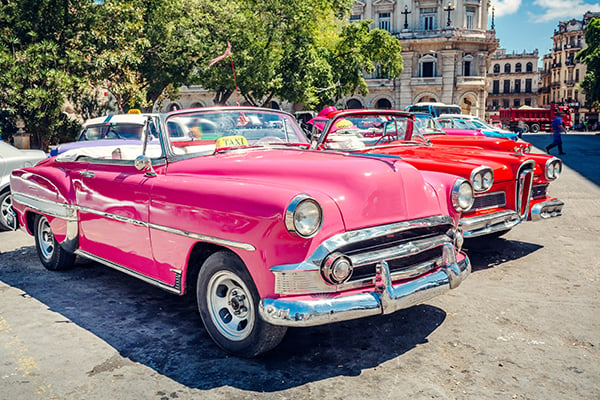 Time stands still on the Caribbean’s largest island. Classic Ford Thunderbirds rumble along the seawall beside the crumbling Spanish-Colonial palaces peering out over the ocean. Cuba’s beauty disguises a complicated history that Americans are just now glimpsing for the first time in more than half a century. To see it for yourself, you’ll need to know the dos and don’ts of visiting this forgotten slice of paradise:

Do learn Spanish. Spanish is the official language in Cuba.

Do visit a Bodega. Since the embargo, Cubans have relied on a ration system to purchase bread, rice, beans and other staples. If you want an honest look at the impact of politics on actual people, pop into a state-run food store.

Do bring cash. You’ll need 25 CUC (Cuban Convertible pesos) in cash for every person in your party (including infants) for your departure tax at the airport. Having cash is important since there are few ATMs, and getting funds at a bank can be difficult.

Do know your currency. CUC currency features national monuments on the money and are used to pay for all goods and services. National pesos, which are worth considerably less, feature the images of Cuban leaders and are used to pay local citizens. Make sure that you pay with the correct currency, and check to see that you receive the right type and amount of change.

Do buy cigars from official stores. Street vendors rarely sell the real deal. For a premium product, purchase Cubans from Casa del Habanos, or directly from the factory.

Do dress casual. Cuba is hot, so lightweight sundresses and cotton clothing are ideal. Comfortable footwear is also a must, as are hats and sunglass which block out the sun.

Do eat in a paladar. These once-illegal restaurants are housed in old mansions and family homes and offer a great peak into Cuban Creole flavors

Do ride a classic car Cienfuegos. Book a tour of one of Cuba’s most scenic cities in an old fashioned American car.

Don’t discuss religion and politics. Most citizens are willing to engage in topics about their country. However, many consider it unpatriotic to be critical of the regime and you should be sensitive if a local is reticent to discuss certain topics. Basically, if you wouldn’t broach a subject at home, don’t do it abroad.

Don’t travel alone at night. Instead, stay in tourist areas, with a local guide or travel with a group travel company like YMT Vacations.

Do not take photos of military or police officers. You may be arrested for spying.

Don’t speak against the Cuban government. Freedom of speech in the country is still severely limited.

Don’t carry excessive amounts of cash. Cuba is a safe country, but pickpocketing—especially from flashy tourists—can be an issue.

To experience Cuba and learn about its people, history and culture book a YMT Vacations tour. To learn more, contact your travel professional or call 1-888-756-9072.