My Experience at Greece’s Ancient Sites 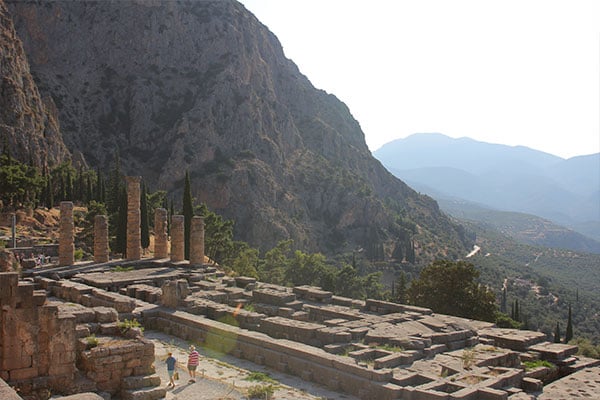 In 2019, my lifelong dream to see the ancient sites of Greece came true. I was raised hearing about the country’s magic, so arriving in Athens felt like a homecoming.

The people, the culture, the food, and the warm, salty Aegean Sea all felt like a natural fit. Most people spoke English, and the ones who didn’t had expressive hands like me, so communication was never a problem.

My husband and I wanted to make the most of our trip. What could we see here and nowhere else in the world? What most piqued our interest? What promised to move us? What seemed the most Greek?

The answer was: ancient sites. We have seen our fair share of old places. We’ve both spent quite a lot of time in Britain, and I lived in New England for school. But sites from thousands and thousands of years ago? That we’d read about and heard about our whole lives? That would be totally new for both of us.

These were our favorite historic sites:

My favorite ancient site was Mycenae, which dates back to the 16th century BC during the height of the Bronze Age. To put it in perspective, Mycenae is so old that the Ancient Greeks considered it Ancient Greece.

At its peak from the 16th-11th centuries BC, Mycenae dominated most of the Greek mainland and islands, and much of Asia Minor. Ancient Mycenae is the setting for Homer’s Illiad and Odyssey, and the Mycenaens can even take credit for hunky Hercules.

The entrance to Mycenae is through the stunning Lion Gate, a massive door topped by a triangular sculpture of twin lions. We arrived before the crowds, so we got to properly experience the grandness of the gate. It was built to impress visitors. To show that Mycenae was both wealthy enough to afford large scale engineering projects, and advanced enough to complete them. The city is surrounded by a Cyclopean wall made of stone blocks so large they could only have been built by one-eyed giants.

We continued up the path, and the site only grew more spectacular. The strategic brilliance of the city’s placement was obvious. We could see straight for twelve miles through a fertile valley all the way down to the Aegean Sea. From this massive citadel, with a population of around 30,000 and a well-trained army, Mycenea safely grew strong and rich.

It felt surreal walking through Mycenae, seeing stones as big as bathtubs with chisel marks older than most religions. Until I walked around, walked up hills, looked out at the ocean, stood in the cool of the cavernous tombs, it didn’t seem possible that people were ever really here. But after experiencing Mycenae, it felt lived in.

People fell in love here, sisters bickered, old friends laughed. They were real people, living lives that would someday become legends and myth. But when they were here, they simply lived 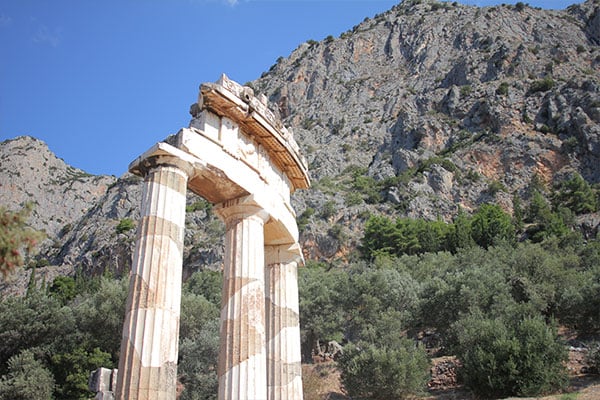 My second favorite site was Delphi. The surroundings are spectacular. From its perch on the side of a mountain you can see for miles, all the way down to the ocean. In addition, it is the home to many, many cats.

Delphi was hugely important to the Ancient Greeks. Found at the foot of Mount Parnassus, it was home to the sanctuary of Apollo, the Olympian god of light, knowledge, and harmony.

Starting in the 8th century BC, Delphi was thrust into the spotlight. It changed from a small but spectacularly beautiful settlement to a holy place unmatched in its cultural importance. Because here, in the center of the sanctuary of Apollo, the Pithia, or High Priestess, foretold the future in her role as the Oracle of Delphi.

From the 8th century BC through the 4th century AD, Greek’s wealthiest and most powerful citizens flocked to Delphi to consult the oracle on all matters of great importance. The oracle would enter a trance and, on behalf of Apollo, cryptically answer questions. Her answers were vague enough that in the 12 centuries from the temple’s construction to its shuttering at the hands of the Romans, she was never wrong. 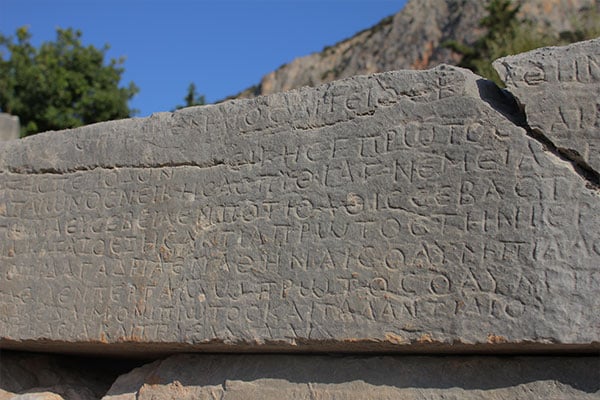 The site is a mixture of stone ruins, historically authentic temple recreations, and a beautifully curated museum. The ruins were my favorite part. The reconstructed Treasury of the Athenians, the stadium where the Pythian Games took place, and of course the Temple of Apollo itself were incredible.

I was more interested in the discarded original stone blocks found around the main attractions. Many of them were still covered in ancient writing. The imperfectly straight stones had distinct chisel marks from when they were carved by hand thousands of years ago, but in the bright sunlight you could also make out faded letters. Although they were hard to see, these symbols were some of the most touching artifacts I encountered on my trip. 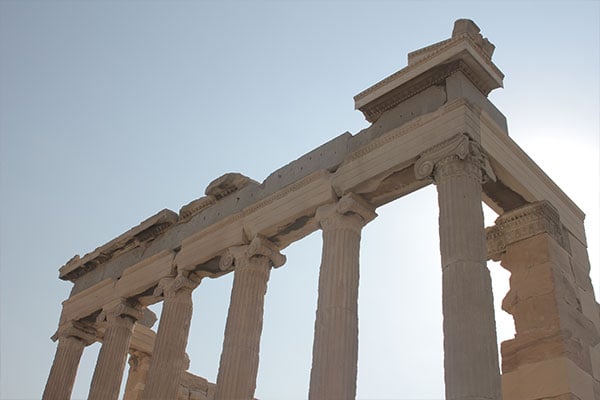 My third favorite ancient site was the Acropolis of Athens, the most famous site in Greece. This grand citadel built in the 5th century BC on a rocky outcrop above Athens is dedicated to Athena, the city’s patron goddess. It was also meant to show off the glory of Athens—and it was a wild success.

The grounds surrounding the Acropolis are full of history. I was an active but untalented member of my high school’s drama club, so I loved seeing the ancient amphitheater. My husband was excited by the Areopagus, the hill west of the Acropolis where the Apostle Paul made his famous sermon about the Unknown God.

We passed by the Erechtheion temple to Poseidon and Athena, the monumental gateway known as the Propylaia, and countless sculptures. Finally, we made it to the top of the hill. To the pièce de résistance, the glorious Parthenon whose massive columns and beautiful exterior frieze make it the pinnacle of classical Greek architecture.

I loved its incredible view of Athens. I loved how instantly recognizable its influence was. But what I loved most was being there at all.

My Trip of a Lifetime 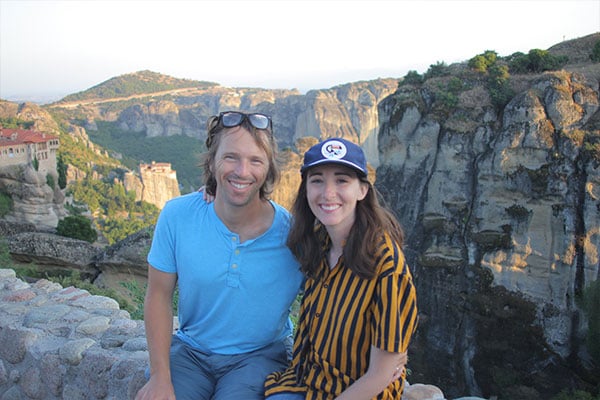 This trip was the realization of a lifelong dream. On our first date my husband asked where in the world would I go, if I could snap my fingers right that minute. And the answer was, here.

Since I was six and my mother told me about how she’d once fallen in love with a magical, beautiful country very far away. I’d always dreamt of weaving my way through Greece, seeing old places, communicating poorly with locals, snacking around the clock in idyllic outdoor tavernas.

Being there at the Acropolis, melting in the heat next to the love of my life, earned me a great big CHECK on my bucket list. It was better than I could have imagined, and I can’t wait to go back again.

If Greece’s ancient sites interest you, join YMT on our Greek Odyssey & Aegean Cruise or our Ultimate Greece & Italy tour!

This tour has everything: ancient history, sun-drenched islands, and even a tzatziki demonstration. To join us and see Greece’s ancient sites for yourself, call your travel agent or YMT Vacations at 1-888-756-9072.

Guest Blogger Diana Cowgill is a copywriter at YMT Vacations. She and her husband love to flit around the world together, gorging on regional baked goods and petting as many street cats as possible.