14 Phrases and Words You Should Know Before Visiting Hawaii 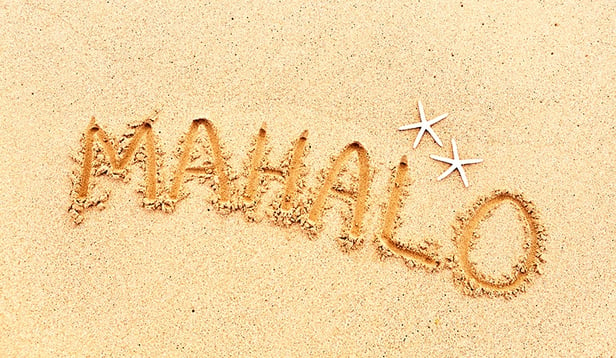 In 1893, Queen Liluokalani was deposed by a group of American sugar planters with the help of a division of the U.S. Marines, making her the last reigning monarch of Hawaii. For more than six decades the islands, which were originally settled by Polynesian voyagers, remained a U.S. protectorate until March 1959 when Hawaii finally became the 50th state of the Union. A year later, the final star was added to the American flag.

Despite its new banner, Hawaii remained culturally distinct from the rest of the US. Partly due to distance, partly a result of strong island traditions and an ethnically diverse citizenry, Hawaii has always been unlike any other corner of our nation. In fact, many locals still use Hawaiian pidgin, a language formed from the state’s diverse population of Portuguese, Cantonese, Korean, Filipino, and Japanese. The language is reserved for close friends. Hawaiian pidgin is only used in a business setting if the speaker wants to demonstrate that they were born and raised in Hawaii. Many tour guides will introduce guests to some Hawaiian pidgin words.

Before you make your way to the Aloha State, here are 15 words you’ll need to know before visiting Hawaii:

You can practice your pronunciation and explore the other unique aspects of the islands on the YMT Vacations’ Best of Hawaii Four-Island Tour. This 13-day itinerary lets you stroll the world-famous Waikiki Beach and pay honor to our fallen at Pearl Harbor, dip you toes in black sand beaches and wander through the striking landscape of Volcanoes National Park. To learn more about this exciting journey, or to make your reservations to join us, call your travel agent or YMT Vacations 1-888-756-9072.