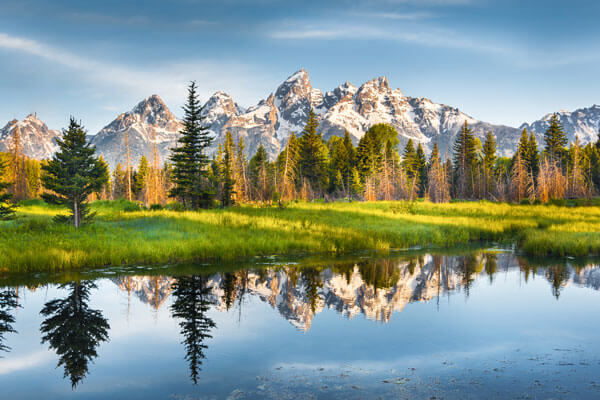 When 19th century French fur trappers came upon the trio of jagged peaks that jutted into the sky above Jackson Hole in Northwestern Wyoming, they cheekily described them as “Les Trois Tétons,” or the three breasts—the tallest of which they bawdily called the “Grand Teton,” or… you can probably fill in the blanks.

Despite the crude origins of its name, Grand Teton National Park is a place of stunning beauty and dramatic vistas. This remarkable park is a must for nature lovers and American history buffs.

Native Americans thrived in and around the modern-day park for 11,000 years, since the end of the glacial retreat of the last Ice Age left behind a landscape teeming with life.

Nomadic tribes thrived in the Tetons, traveling with the seasons in pursuit of the richest resources. Streams, lakes, and rivers were packed with fish, hillsides and meadows were covered in nutritious berries and greens, and prey roamed freely, heading south in the colder winter and returning to the Grand Tetons in the spring and summer.

Euro-American explorers first discovered the area in the 1800s, with mountain men and trappers making up the majority of the population through the 1840s. Homesteaders started to arrive in the 1880s.

Around 1908, Jackson Hole started to earn a reputation as a tourist destination for posh visitors looking to enjoy a genuine cowboy experience in the shadow of the picturesque Teton range. Many of these moneyed tourists fell in love with the land, and sought to save the region from further development.

Today, the park is connected to Yellowstone National Park, making the region one of America’s most spectacular natural settings, with endless activities for travelers of all ages.

Float on the headwaters of the Snake River, cruise on Jackson Lake, try your hand at fly fishing, or stroll the more than 100 miles of paved paths that afford spectacular views of the towering Grand Teton Mountains.

The mountain range lures adventurous climbers who attempt to summit the eight 12,000-foot-tall peaks, including the 13,775-foot-tall Grand Teton, a great vantage point to take in the park’s absolute majesty.

Wildlife abounds, including the peak predators and immense undulates people flock to the park for. Keep your eyes peeled for bears, elk, bison, pronghorn, deer, moose, wolverines, cougars, wolves, and even the noble yellow-bellied marmot!

TRAVEL TO THE GRAND TETONS with ymt vacations

Explore Grand Teton National Park on YMT Vacations’ Rocky Mountains & Western Frontiers Tour. This 14-day itinerary takes you from Mount Rushmore to Little Big Horn, from the majesty of Old Faithful to the wonders that lie along the Highway to the Sky.