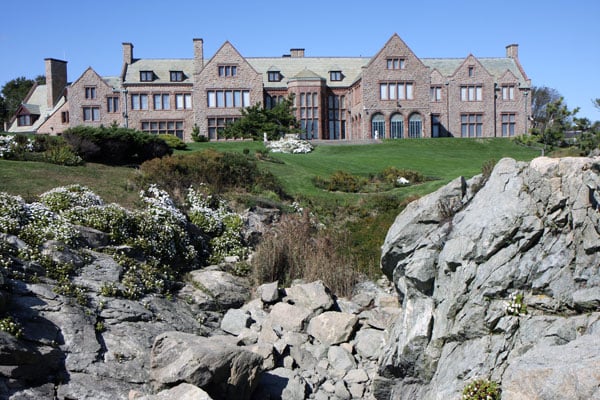 Newport, Rhode Island was the summer playground of the rich and powerful during America’s Gilded Age. At the turn of the 20th century, American commerce experienced an unprecedented boom. Railroad, banking, oil, steel, and mining tycoons earned massive fortunes that they spent lavishly on their image and lifestyles. They wanted to show off their status as American royalty. For the very rich, nowhere was showier than their Newport mansions.

Known as “cottages,” these large, glamorous estates were some of the most beautiful status symbols in the world. Designed by leading architects of the time, most Newport Mansions were built on the cliffs around the modern Bellevue Avenue Historic District.

Over a century later, the mansions of Newport are no longer just the summer homes of the super-rich. Many of the homeowners donated or leased their cottages to preservation societies that have opened them up to the public. Guided and self-guided tours are now available to many of the finest mansions in Newport. But where should visitors go? Which is the best mansion in Newport? Read on to find out!

The cottage known as The Breakers is the most famous mansion in Newport. Many people also believe that it is the best Newport mansion to visit.

The Breakers is an opulent showpiece built by Cornelius Vanderbilt II. He used a not-insignificant chunk of the family fortune to build the compound 1893.

For the Chairman and President of the New York Central Railroad, the summer escape was built to be enjoyed. But more importantly, it was to be admired. The 70-room Italian Renaissance-style manor was inspired by 16th century European palaces. The home was full of priceless art and luxurious furnishings.

The 14-acre grounds include stunning gardens, a forest of mature oak and maple trees, and a large horse facility. Best of all are the dramatic ocean views you can enjoy the property’s private cliff.

Rough Point is another Vanderbilt mansion, commissioned by Frederick W. Vanderbilt. Built in 1887 by architecture firm Peabody and Stearns, Rough Point was designed to look and feel like an elegant English manor. It features red sandstone and granite, wonderful gardens and lawns, and a spectacular view.

Rough Point’s claim to fame is the clear imprint of its most recent resident, Doris Duke. The heiress adored Rough Point. She filled it with lovingly curated artifacts to share with the public upon her death in 1993. Except for the more formal art gallery on the second floor, the home still feels lived in. Rough Point is a museum that, while grand, is also quite intimate. It gives visitors an insight into what living in one of these American palaces would actually feel like. 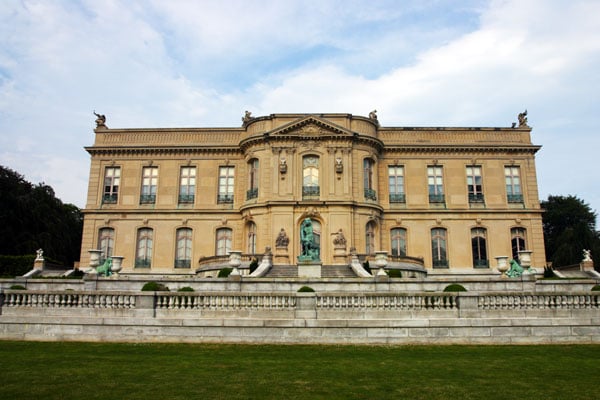 The Elms was the pride and joy of Mr. and Mrs. Edward Julius Berwind, who made their fortune in coal. They paid a reported $1.4 million for this lavish summer home designed by Horace Trumbauer.

The Elms was inspired by the mid-18th century Château d'Asnieres, a gorgeous chateau outside of Paris. The Elms’ sprawling grounds reflected the European elegance of the interior. It had multiple gardens, numerous mature trees, and a museum’s worth of stunning sculptures.

The Elms was also famous for its inner workings. The gentleman of the house had a strong interest in technology, so the Elms was cutting-edge for its time. It was one of the first homes in the country to be wired for electricity. They even had an electric ice maker, a very advanced gadget for the time.

Another Vanderbilt Mansion, the elegant Marble House was a 39th birthday present from William to Alva Vanderbilt. They saw it as an American “temple to the arts.” Inspired by Versailles, the Beaux Arts-style cottage was designed by the architect Richard Morris Hunt. It cost a reported $11 million to build—over a quarter of a billion dollars in today’s money.

In 1899, architect Stanford White modeled Rosecliff after the Grand Trianon chateau at Versailles. The owner and mistress of Rosecliff was the enormously wealthy silver heiress Theresa Fair Oelrichs.

The house was completed in 1902 and was the scene of some of the most legendarily fabulous parties in all of Newport. These soirees included a lavish fairy tale dinner, and a party with entertainment by the legendary magician Harry Houdini.

The elegant Chateau-sur-Mer is a stunning example of High Victorian architecture. Completed in 1852, it was Newport’s biggest residence until the Vanderbilts came to town in the 1890s.

It was famous for its over-the-top parties. It hosted the "Fete Champetre" country picnic for thousands of guests in 1857. It was also the site of the elaborate debutante ball for Miss Edith Wetmore in 1889. Its massive scale and grand parties ushered in Newport’s Gilded Age.

If the elegance and grandeur of the America’s Gilded Age calls out to you, join us to see the most famous houses in Newport, Rhode Island. Pack your bags and see the Breakers on our Autumn Leaves Tour or New England & Canadian Maritimes Cruise and Tour. For information, or to make your reservation on a journey including a tour of the very best Newport mansions, call your travel agent or YMT Vacations at 888-978-7406.