When Mount Vesuvius exploded in a shower of fire and lava, it buried the city of Pompeii under 20 feet of ash and pumice. The town, its artifacts, and even its people laid entombed and lost to the world for over 1,700 years.

When the ruins of Pompeii were discovered and unearthed in the mid-16th century, most of the city remained intact, which spoke to how quickly the disaster occurred. Explorers found evidence of an ordinary life unexpectedly interrupted: inhabitants in lifelike poses, petrified bread still in ovens, and dogs chained beside their masters. The violent eruption of Mount Vesuvius caught thousands of inhabitants by complete surprise, but what remains of the ruins of Pompeii today? 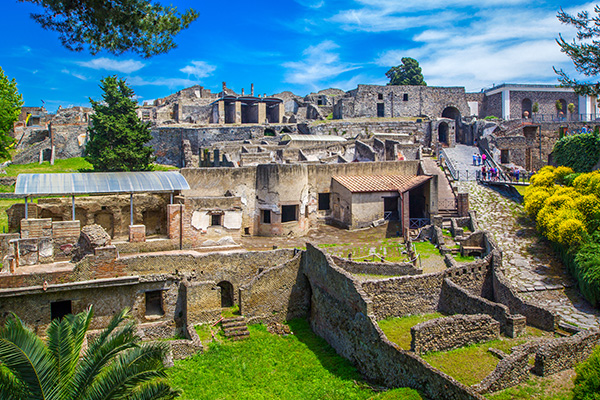 Today, this captivating archaeological site brims with historical relics and fascinating stories of the town’s everyday life as well as its tragic end. Attracting millions of tourists each year, Pompeii is a must-see destination while in Italy. If ever you find yourself visiting Pompeii, here are five things to see in one of the greatest cities of the Roman age:

This vast colonnade served as Pompeii’s economic, political, and religious center, and is considered the heart of the city. Visitors to the Forum will see the remnants of an ancient square ravaged by the lava: imposing columns, important public buildings, grand courtyards and travertine marble roads.

The House of the Faun

This enormous home was believed to be the private villa of an elite family. The opulent house helps us understand the richness and fortune of the Pompeii people. The residence gets its name from a small bronze statue of a dancing faun in the center of the principal room.

The Amphitheater of Pompeii

Located at the end of the via dell’ abbondanza, this site is the oldest stone building of its kind, dating back to 80 BC. In the upper part of the amphitheater, there are large holes that were once used to hold a covering over the arena to protect privileged spectators from rain and the harsh rays of the sun.

The Villa of Mysteries

Many believe this Roman mansion to be the home of Livia, the wife of Emperor Augustus. The dwelling features a series of frescoes, whose meanings remain unknown. The paintings depict a young woman in worship, either for her wedding or in worship of Dionysus. The villa is one of the places where the many bodies of those overtaken by Vesuvius were found.

A Pompeii tour is included on our Amalfi Coast & Mediterranean Cruise Tour. Experience the best of the Mediterranean with cruise stops in Italy, Spain, France, and Malta. Then enjoy 3 additional days on the Amalfi Coast, where you’ll take a full-day Pompeii tour, explore Sorrento, and more. To make your arrangements, call us at 1-888-756-9072.