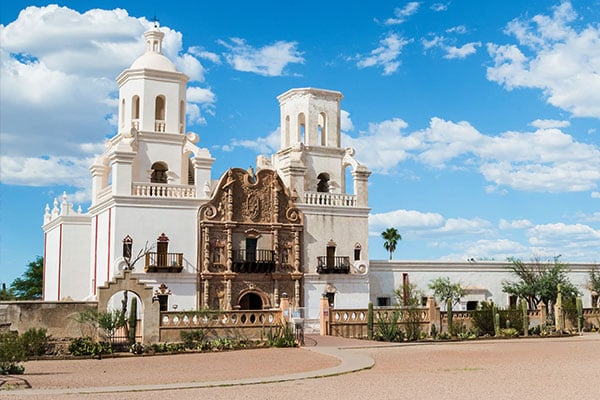 On the stunning façade above the ornate door of Mission San Xavier del Bac, a stone-carved cat, its sharpest details rounded down by years of wind and desert rain, crouches, ready to attack the mouse on the other side of the grand entryway. Legend says that when the cat finally eats, the world will end.

Nicknamed the “White Dove of the Desert” and listed as a National Historic Landmark, the mission is still an active church. It has been abandoned, survived an earthquake, and most impressively withstood both the ravages of the time and the encroachment of the modern world. It stands as a striking beacon in the Sonoran Desert, at what the Spaniards who built it considered the very edge of the known world.

Founded in 1692, San Xavier has belonged to three countries—Spain, Mexico, and the United States. Sometimes called the Sistine Chapel of the United States, this Catholic church is arguably the finest example of Spanish colonial architecture in the country. The mission is also Arizona’s oldest building of European origin. Its Byzantine walls are adorned with frescoes, statues, carvings, and paintings created by both Native Americans and Spanish missionaries.

San Xavier del Bac is part of a chain of missions established by Father Eusebio Francisco Kino that pepper Arizona and Northern Mexico. Located just south of Tucson, San Xavier del Bac sits on an Indian reservation. It is still an active parish for the Tohono O’odham tribe.

One of the strangest legends surrounding the Mission must be its mummy. In 1849, many residents of a nearby town moved to San Xavier, bringing their most precious belongings and artifacts with them.  The legs of one of their finest wooden statues did not survive the trip.

The statue now lies permanently under glass in the Mission’s west transept. With his arms glued to his side and his nonexistent legs covered by a cloth, he looks like a very beautiful Egyptian mummy.

Nobody knows when the myth of the statue actually being a mummy began. But the intriguing rumor spread. Today, even if the “mummy pilgrims” don’t believe they’re visiting an actual mummy, it adds an extra element of fun to the White Dove of the Desert.

Given its location in the Sonora desert, it’s no surprise that the elements have occasionally been unkind to San Xavier. In 1887 an earthquake knocked down its mortuary wall and damaged parts of the church. In 1939, lightning destroyed the west tower’s 18th-century lantern. In 1964, one of the worst tornados in Southern Arizona history struck, very narrowly avoiding the mission but hitting the neighboring community head-on. In addition, the mission fell into disrepair in the mid-1800's.  Mexico had banished all Spanish-born priests, leaving it vacant for over 20 years.

Despite the various calamities the mission has faced, including simply the passage of time, it has long been supported by the local community. In the past few decades, nonprofits such as Patronato San Xavier have raised over $11 million.  These funds preserve and restore this must-see Tucson attraction, including its exterior, ornate interior, and priceless artwork. 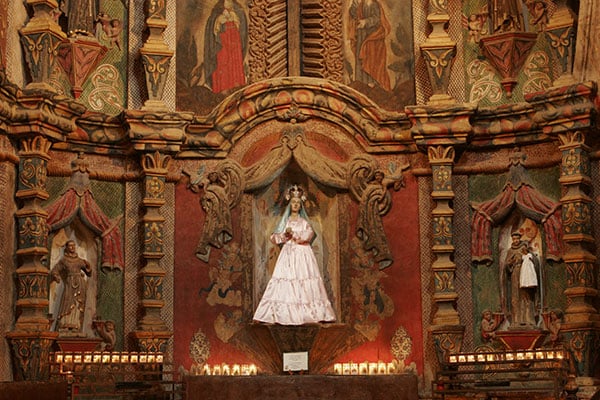 Besides enjoying the mission or sitting for daily mass, travelers can explore a marketplace and shop for indigenous crafts. There is also a museum where they display historic artifacts. It’s a popular stop for people to take pictures of the stark-white stucco contrasted against the muted desert landscape.  If you visit, make sure to zoom in to see how the cat and mouse are doing. The lovely grounds have gorgeous views, particularly at sunset, of the nearby Tucson Mountains.

When you come to San Xavier today, you can tour the mission, the museum, and the gift shop.

Hours are subject to change, and visitors should know that the facilities do not have heat or air conditioning.

You can see the over 220-year-old White Dove of the Desert, one of Southern Arizona’s top tourist destinations, with YMT Vacations. Our popular fall Albuquerque Balloon Fiesta & Southwestern Tour is the ideal way to explore the history and culture of the Southwest. This is a must-see for visitors to Tucson, and you can get more information or make reservations by calling your travel consultant or YMT Vacations at 888-978-7406.