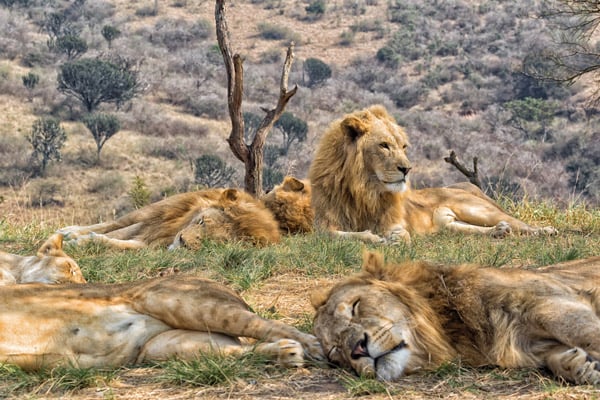 South African animals are some of the most iconic wildlife in the world. It’s home to nearly 300 mammal species, 450 reptile and amphibian species, and almost 850 different kinds of birds. This southernmost nation in Africa is a dream destination for animal lovers. South Africa is the best place in the world to the see legendary “Big 5” and countless other incredible animals.

The Big 5 African animals are what people think of when they hear the word safari. Lions, leopards, rhinos, elephants, and Cape Buffalo make up the Big 5 because they are the most sought-after safari sightings. 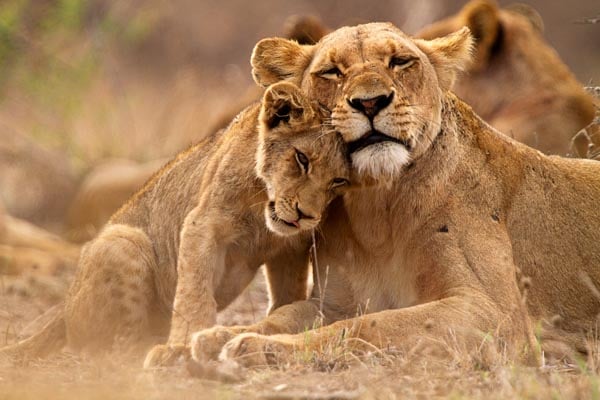 African lions comfortably sit at the very top of the food chain. These apex predators often live in prides of 15-30 individuals. Two to four adult males join numerous lionesses and young cubs in a highly social extended family. Lions also live in groups of just males or females, or as solo nomads.

Within prides, male lions patrol and defend their territory. Lionesses do most of the hunting, pursuing their prey as an effective, coordinated team. They often separate individual animals from their larger herd, corralling them towards other members of the pride. Because lions have poor stamina, they prefer a swift ambush to a long chase. Lions will stay concealed before lunging at the last moment to make the kill.

What all lions prefer, however, is free food. They will eat carrion or steal meat from other predators, whose only hope is to outrun or avoid the larger and stronger lions. Males can weigh up to 500 pounds, and big females have been known to tip the scales at 300.

Cape Buffalo, or African Buffalo, are massive, famously ill-tempered members of the bovine family. This distant relative of the domestic cattle is known as one of the most dangerous animals in Africa. They are aggressive and fearless when their herd is threatened and can charge at up to 35 miles per hour.

Cape Buffalo live in herds made up of calves, females, and one or more dominant males. Smaller sub herds of bachelor buffalo linger around these mixed herds, remaining on the outskirts until mating season.

The dominant bulls tolerate these other males because the bigger the herd, the better. Cape Buffalo rely on the strength of the group for safety, sticking close together when predators are nearby.

When Cape Buffalo herds are attacked, they mob their predators. Adults will break from the herd to aggressively hurl themselves at any lion, leopard, hyena or crocodile that they deem to be a threat. Cape Buffalo have been known to chase lions up trees and not let them down for hours at a time. 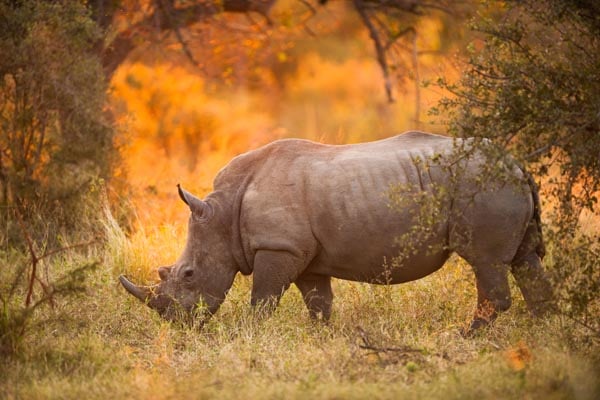 The mud-loving, near sighted, double-horned rhinoceros is one of Africa’s most fascinating animals. The two African subspecies, white rhinos and black rhinos are both grey. Black rhinos weigh between 2,000-3,000 pounds, and white rhinos vary between 3,000-7,000 pounds.

Rhino skin is incredibly thick yet sensitive. Mud is the rhino’s version of sunscreen, bug spray, and self-care all in one. From a young age, rhinos wallow around the edges of waterholes, rivers, and even large puddles to cover themselves with protective mud.

When a rhino senses a threat, its first instinct is to charge. Because their vision is poor and their charging instinct strong, they have been known to attack rustling trees and boulders when startled.

Rhinos have a symbiotic relationship with oxpeckers, small birds that can survive just on the parasites on a rhino’s skin and face. Along with pest control, oxpeckers also act as the rhino’s alarm system. Perched on the rhino’s back, oxpeckers alert their large friends to danger in the distance. 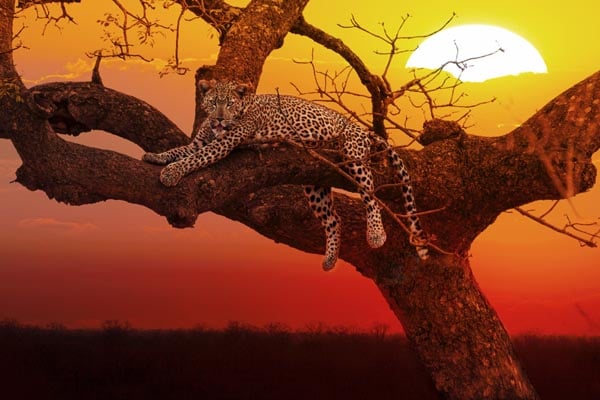 African leopards are strong, athletic, and intelligent. They are perfectly adapted to survive and thrive in the unforgiving world of the South African savanna.

Leopards are masters of concealment. Their light fur and dark spots help them remain hidden in the tall grasses, trees, and riverbanks where they stalk their prey. Leopards hunt at night, ambushing and overpowering prey with their powerful jaws and tremendous strength. The strong swimmers have been known to watch prey for hours from the muddy banks of rivers and watering holes.

Bugs, birds, and small mammals are all part of leopards’ diets, but they can also take down much larger animals. When they do kill a heavy animal such as a springbok or zebra, leopards have to be careful with their leftovers. They drag their kills up trees, carrying up to 200 pounds of meat high into high branches well beyond the reach of other predators. 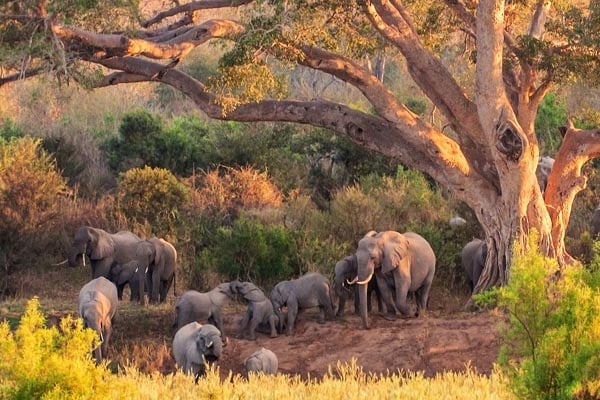 The biggest land animal in the world, elephants are the genius gentle giants of South Africa. Males stand between 10-11 feet tall and can weigh more than 15,000 pounds.

Because of their size, elephants have no natural predators. However, they are in constant battle with heat and the blazing African sun. Like rhinos, they coat themselves in mud to protect their thick yet sensitive skin. In addition, elephants use their floppy ears like fans, flapping them to stay cool.

Elephants use their trunk to smell, breathe, touch, and communicate. Their trunks are capable of extreme precision and gentleness. They can crack open a peanut, wipe their eye, or pluck a single berry from the top of a 23-foot tree. Their trunks are also able to function like a snorkel—very useful during a swim.

An elephant’s sense of smell is more than four times as powerful as a bloodhound’s, and is particularly fine-tuned to the smell of angry bees. African bees are one of the few things that elephants fear. The infamously aggressive “killer bees” can fly inside an elephant’s trunk to sting them—which is something an elephant truly will never forget.

Other Animals in South Africa

The Big 5 makes up just a tiny fraction of South Africa’s magnificent wildlife. Funny, fast, or fierce, you’ll want to keep your eyes peeled for even more uniquely South African animals found across the country. 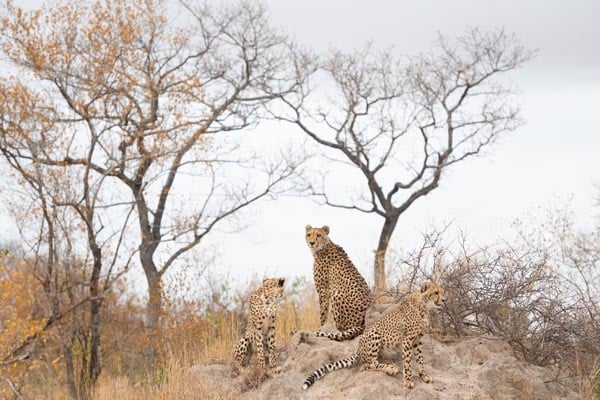 Cheetahs are the fastest animal in the world. They can run at 60 miles an hour, making the sleek and slender cat one of the most formidable hunters in Africa. Their tall legs, deep chest, and long tail help are perfectly adapted for extraordinary speed and agility. These big cats can reach a full sprint in fewer than three seconds, and turn and stop just as quickly.

Male cheetahs are far more social than females. Males often live in groups made up of brothers and unrelated males they meet along the way. These groups share prey, offer one another affection and protection, and are usually healthier and larger than solitary males. Females, on the other hand, want nothing to do with other cheetahs. They remain alone except during mating season and the first two years of their cubs’ lives. 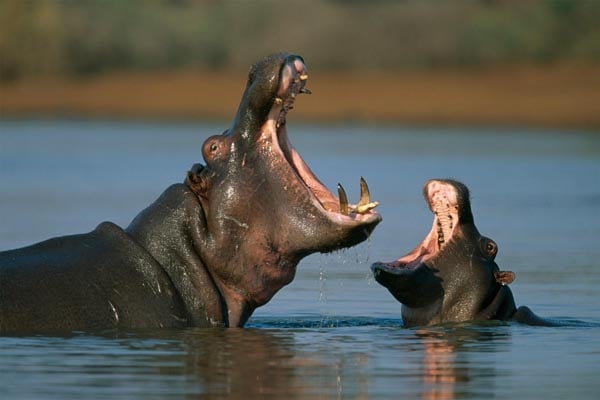 Hippos are big, bad, semiaquatic herbivores that range in size from 2,800 to 3,300 pounds. They spend most of their lives in and around the water, typically only leaving at sunset to graze for hours on up to 150 pounds of grass at a time.

Despite spending the lion’s share of their time underwater, hippos don’t float and can barely swim. When a lake or river is deep enough to submerge in completely, they sink and either walk or bound along the bottom.

Most hippos live in schools of about 30 males, females, and calves ruled over by a single dominant male. These alpha bulls viciously defend their territory, their hierarchical position, and their right to breed. They are violent fighters, using their teeth to slash and stab other males, crocodiles, or the poor unsuspecting animals who wander onto their banks for a drink. 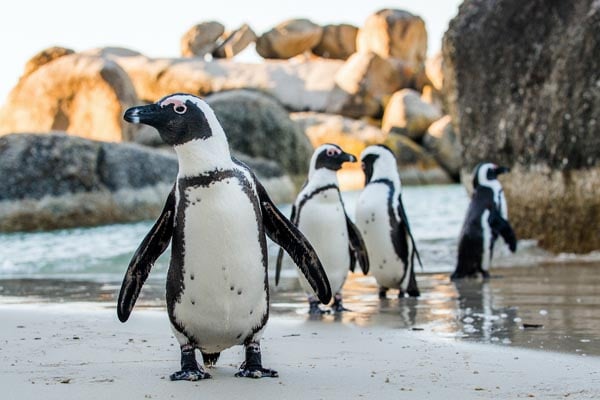 African Penguins, also known as Cape Penguins, are delightful little birds that live in colonies along the rugged South African coast. They are around two feet tall and weigh just about 9 pounds.

African penguins don’t fly, but they are powerful swimmers who catch and eat up to a pound of squid, anchovies, and sardines every day. Their sharp beaks are excellent weapons, used in hunting and self-defense. The risk of a nasty pecking is one of the reasons that visitors to South African beaches are encouraged to give these tuxedo-clad cuties a wide berth. 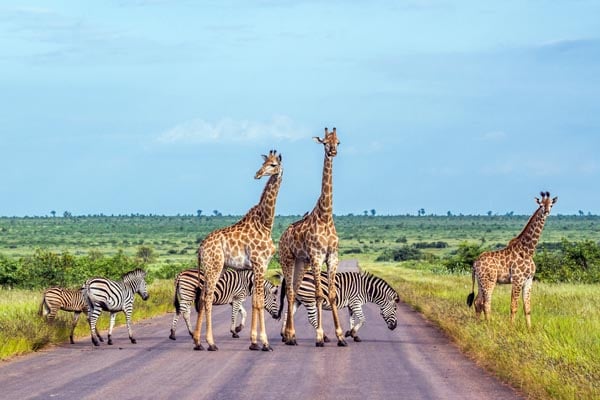 Towering at a height of 14-19 feet, giraffes are the tallest mammals in the world. Perched on 6-foot-long legs, they stride through the savanna in search of treetops rich with luscious leaves. They eat hundreds of pounds of greenery each week, which is also their main source of water.

They travel in small same-sex herds of females and their offspring, or bachelor males. During mating season, males occasionally fight for the chance to breed. The males pummel one another using their long necks, with fights usually ending without injury to either. Giraffe births, on the other hand, are quite violent. Females give birth standing up, so the first thing a newborn giraffe experiences is a short freefall and very abrupt landing.

Where to See South African Animals

Because South Africa has such a large and diverse landscape, there are countless opportunities and destinations for animal watching.

Kruger is the best place in the world to go on safari. Africa’s most iconic animals live in Kruger, including the Big 5, cheetahs, hippos, giraffes, massive Nile crocodiles, hyenas, and antelopes. Five rivers flow through the park, providing water sources for the animals and exceptional wildlife viewing opportunities. 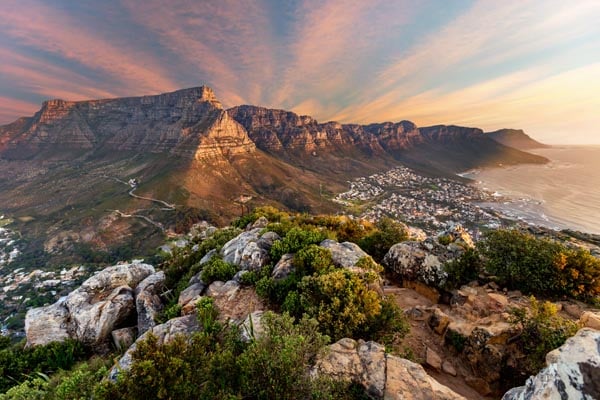 Table Mountain is recognized by UNESCO for having some of the highest plant biodiversity in the world, but it also offers incredible wildlife viewing. The easily accessible Boulders Beach is home to a colony of over 3,000 African penguins. In addition, the charming dassie is found throughout the park.

See the National animals of South Africa with YMT Vacations. Our South Africa Safari Tour is a dream come true for any animal lover. Spend a full day and a half on safari in Kruger National Park. See rare African penguins at Boulders Beach. Discover hundreds of species of birds at Birds of Eden, the world’s largest free flight aviary. Look out for dassies at Table Mountain National Park. This unforgettable journey will allow you to see these animals in their natural habitat, and promises to be one of the best vacations of your life. To make your plans to join, call your travel consultant or YMT Vacations at 1-888-756-9072.