Is There a Real Southfork Ranch?

Glamorous magnets for drama, the impossibly wealthy Ewing family dominated television from the late 1970s through the early 1990s on the primetime tv series Dallas. Their constant scheming, backstabbing, cheating, and deception gripped viewers—350 million people around the world tuned in on November 21, 1980, to find out who shot J.R.—and one of the most popular characters was the opulent setting itself.

The Ewings were a fictional Texas oil family who loved money, power, and the legendary Southfork Ranch, their massive familial estate. Southfork Ranch, the setting of many of the most infamous moments from the series, was extremely real, however, and viewers have been eager to see it in person since the show’s earliest days.

Where Is Southfork Ranch?

Have you ever wondered where was Dallas filmed? Duncan Acres in Parker, Texas was chosen in 1978 by Lorimar Productions to stand in as Southfork Ranch, Dallas's most important filming location. Once the show became popular, fans flocked to the ranch 25 minutes outside of Dallas, Texas. They hoped to catch the cast and crew filming the newest scandalous scene.

They were often disappointed, as all interior scenes were filmed at a sound stage in Los Angeles. Even so, Duncan Acres was so inundated with visitors that the owners decided to sell the property.

The new owners officially changed the name to Southfork Ranch, and opened the grounds and house to the public. It soon became a mecca to fans of television’s hottest drama. It’s estimated that in 1984, when the show was at its most popular, over 1 million fans came to Southfork Ranch.

Twenty years after its successful first run ended, Dallas remains a huge draw—and visitors continue to line up for tours of the ranch. The grand mansion and orderly grounds entice fans of the show who wish to get out of the city to see the real Texas.

How Big is Southfork Ranch?

The show makes the Ewing's home seem as if it takes up about a third of the state, but how big is Southfork Ranch? The property, now worth approximately $6 million, covers over 300 acres. It includes the 5,900-square-foot Ewing Mansion, herds of horses and cattle, barns, a large event and conference space, and numerous other buildings. 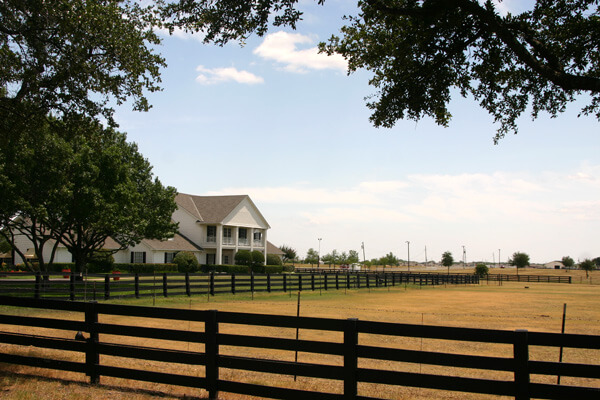 The Visitor Center is full of incredible memorabilia, including handprints, autographs, Lucy’s wedding dress, and video interviews with the show’s cast. The Visitor Center is also home to the Ranch Roundup Store, the perfect place to pick up some fun branded collectibles, or for a photo op.

Next, take a tram ride right to the Ewing Mansion. The scenery is beautiful. Look out for grand oak trees, wild songbirds, and the classic silhouette the proud Texas Longhorns that call the Southfork Ranch home.

The Ewing Mansion is your next stop. Learn about the characters, the actors, the production, and maybe even some tantalizing gossip about what really happened during filming. The tour guides are some of the best you’ll encounter. Many have been leading tours for years.

After you’ve seen the mansion’s many rooms, take a walk through Southfork’s stunning grounds. Fans of the show will love the pool. Though it may be a lot smaller than they’d expect because of the movie magic used in filming.

Everyone will appreciate the many acres of smooth lawn, the grand Texas live oak trees, the massive Texas Longhorns, and the friendly horses. You can book trail rides or horse-riding lessons to get the true experience. In addition, you won’t want to miss taking a picture with Jock Ewing’s grey Lincoln Continental—a true boat of a car measuring 19-feet from tip to tail.

What visit to a Texas ranch would be complete without a barbecue? Groups can sign up to enjoy The Chuckwagon Dinner. Eat traditional Texas barbecue with all the fixins’, served from the back of a wooden-wheeled chuckwagon. Nothing is better than delicious barbecue enjoyed to the sound of gently strummed campfire music and cowboy poetry—it’s a perfect Texas end to a perfect Dallas day!

If you’d like to see what all the fuss is about, join YMT at “The World’s Most Famous Ranch” on the Heart of Texas & New Orleans tour. Explore the grounds, tour the Ewing Mansion, and enjoy a delicious Chuckwagon Dinner at Southfork Ranch as part of your tour of Dallas. That’s just one part of our delightful 11-day tour from New Orleans to Dallas, Texas. Call your travel professional or YMT Vacations at 1-888-756-9072 to book!