Spain is the second most visited country in the world. It is a diverse nation made up of 17 regions, each with its own culture and traditions. To fully appreciate the local culture, it is a good idea for travelers to familiarize themselves with Spanish customs.

Here are some tips for visiting Spain.

Spanish Etiquette: What to Do

The following actions will ensure you have the most authentic experience during your Spanish tour.

Do: Learn Some Local Lingo

Spaniards will appreciate your attempt to communicate in the local dialect. Key phrases related to greetings, food, and directions are a good place to start. It is also worth remembering that Spanish is not the only official language of the country. Autonomous regions have a second official language.

For example, Catalan is spoken in Catalonia and Basque in Basque Country. While everyone will speak Spanish, it is a nice gesture to greet locals in their own dialect. Get started with these common Spanish phrases.

Do: Expect Quiet During Siesta

This midday break between 2-4pm is an iconic part of Spanish culture but is often misunderstood by foreigners. In big cities, locals use this break to eat lunch with friends, colleagues, or family. It is a period of rest, where people can reset before finishing the remainder of their day.

Because many businesses and shops close during siesta, plan to do your shopping before or after this mid-afternoon break. A guided tour with YMT Vacations will include activities that are open during siesta. 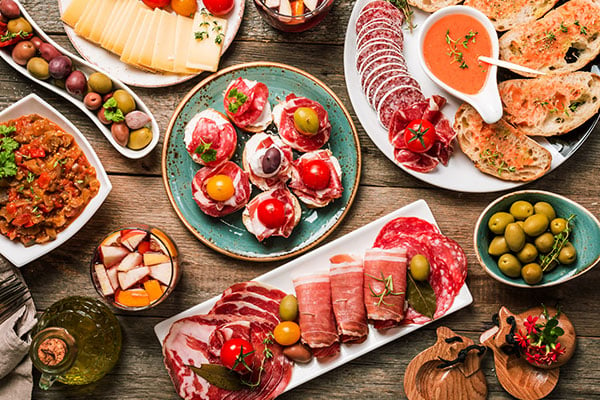 One of the most popular Spanish customs is eating tapas. A tapa is not a specific type of food, but rather a way of eating. They are small portions of Spain’s many traditional dishes. Popular tapas include:

When you go out for tapas, do not stay in a single location for too long. Instead, try different tapas at various bars to sample multiple versions of your favorite dishes.

Do: Expect to Eat Late

Mealtimes in Spain are later than in other countries. Spaniards generally eat lunch between 2-4pm, and have dinner after 9pm. Many restaurants do not open for dinner until 8:30pm. If you are looking for a local dining experience with a busy atmosphere, eat after 9pm. Rely on snacks throughout the day to keep you satisfied until dinnertime.

When meeting new people, it is customary to greet them with a handshake or a kiss on each cheek. Females always greet each other with a kiss on the left cheek, followed by the right cheek. Men greet women with kisses while greeting other men with handshakes. Locals may be offended if you refuse to participate in this tradition.

Spanish Etiquette: What Not to Do

Avoid these cultural faux pas during your vacation in Spain.

Each autonomous region has a different identity, culture, and local language. Understand and respect the particular customs of the regions you visit. Misinformed comments may be considered offensive.

If you plan to visit Northern Spain, you should learn some important things to know about Basque Country. Barcelona is located in the province of Catalonia; compared to the rest of Spain, Catalonians have many cultural differences.

Waiters in Spain earn a living wage and do not depend on tipping. If you feel like your service was above and beyond, feel free to leave a few coins. But rest assured you are not expected to leave anything.

An exception is at high-end restaurants or larger group meals, where you may leave up to 10% if the service was above and beyond. If you are ever uncertain about Spanish etiquette when it comes to tipping, check with your local YMT guide or your hotel’s concierge.

Flexibility is key to dealing with punctuality in Spain. When it comes to social events, Spaniards have a laid-back relationship with time. If an event is scheduled to begin at 8pm, it may not actually start until 8:30pm or later.

Don’t be offended or upset if you get to an event “on time” and it does not start right away. Just arrive a bit later the next time around. When it comes to work meetings or class schedules at school, most locals are punctual.

Don’t: Wear Beachwear When Not at the Beach

Spanish culture and customs require appropriate attire when visiting the country. One of the easiest ways to offend locals is to walk around non-beach areas in swimwear or without a shirt.

Cover up with trousers or a dress when transitioning from the beach to the city area. Wearing beachwear around town makes it very obvious you are a tourist and can make you a prime target for pickpockets.

If Spaniards seem more blunt or direct than what you’re used to, know that it’s just part of their culture. Locals may ask personal questions or give their unsolicited opinions on various topics. They are not being rude, they are just doing what comes naturally in their culture.

Immersing yourself in the local culture is the best way to get the most out of your travels around the world. Understanding some basic nuisances can help elevate your trip. Don’t be afraid to ask questions, especially with your local YMT Vacations guide.