The Ballad of the Buicks: Why So Many American Classic Cars are in Cuba 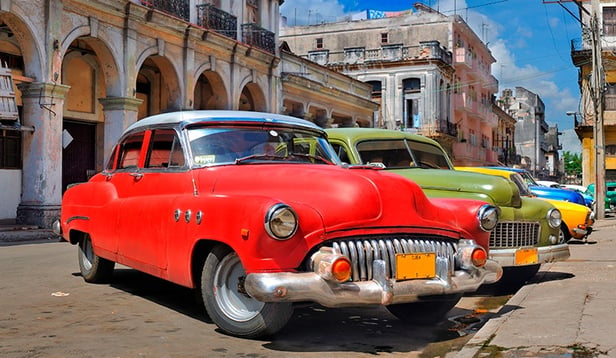 Chevy Bel Airs and Ford Thunderbirds still rumble down the Malecón in Havana, Cuba; 1950s American classics with polished chrome bumpers and candy-apple red paint jobs. Like something from an old movie set, the relics motor along the city streets and seaside boulevards and, for a cost, you can take a ride or pose for a photo with a piece of automotive history. But just where did all these Studebakers and Nash Ramblers come from? Why are there so many? And what do they have to say about the Cuban Revolution?


The rolling car museum that is Cuba is the result of a decades-long grudge Fidel Castro held against the United States. Though just 90-miles across the Florida Straight, the country’s ban on foreign vehicle imports made it impossible for Cubans to buy new, foreign-made cars. Overtime, their everyday vehicles became classics and keeping them running became more about necessity than the love of them.

Masters of invention, the Cuban people kept their cars running with hand-built, improvised parts, often times holding them together with nothing more than Duct tape and hope. Today, those jalopies are a source of income in a country where the average weekly pay is about the cost of a hamburger in the US. Now that Americans are arriving on their doorstep for the first time in half a century, Cubans are happy to show these car lovers a piece of their past...for a price.

You can experience the classic cars and Hemingway haunts of Old Havana for yourself with YMT Vacations. The 2018 All Inclusive Colors of Cuba Cruiseis a tour featuring a 7-night cruise to Cuba with meals, a drink package of your choosing and four fully-guided shore excursions as well as two nights in Montego Bay, Jamaica. For information and help in booking this once-in-a-lifetime experience, call your travel consultant or YMT Vacations at 1-888-756-9072.