The View from the River: China’s Yangtze River Cruise 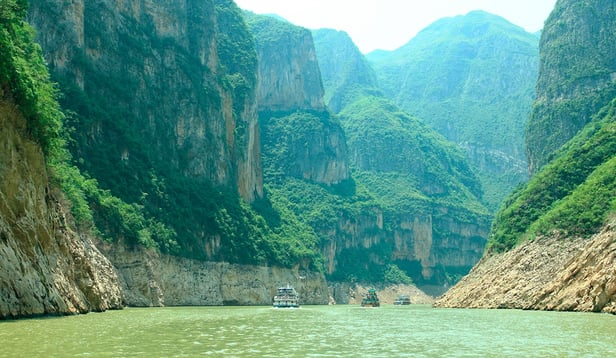 The port city of Shibaozhai is not unlike other villages in today’s China. Small and remote, it was once a town of farmers and fishers; now the people rely on selling miniature glass dragons and stuffed panda bears to propel their economy toward the future.

When YMT Vacations Travel Consultant Joshua Reggiani first visited this town along the Yangtze River he was surprised at its many contradictions. Bustling trinket shops and modern commercial buildings lined crowded streets that snaked their way toward the area’s most famous destination, the Red Pagoda, but just in the periphery of all this progress an old lady sat hunched over a back hoe tilling a field.

“Right there in the midst of everything this woman was farming the same way her ancestors did centuries ago,” he said. “That’s the way it is along the Yangtze.”

There’s a point of view you get on the water that most visitors to China never experience because so many tours focus on land travel. It seems a bit more ancient when compared to the country’s landscape of skyscrapers and traffic jams, a throwback to the days before McDonalds and Starbucks painted the landscape with neon-colored signs.

“Along the river I saw families living in rural houses and watched as fishermen hauled in their catch,” Reggiani said. “It was a change from the landscape of towering condos.”

But what you see today isn’t the way things have always been. These are the villages that remain along the Yangtze after the damming of the river to create China’s main power source: The Three Gorges Dam. Beneath the surface of the water lie the remains of the others that did not survive the flooding.

“If you look closely at the giant rocks you can see where the water line used to be.”

Many river travelers come to witness the technological wonder that is The Three Gorges Dam, an experience Reggiani calls ‘fascinating,’ while others come to sail among the soaring gorges themselves.

“It’s similar to seeing the Grand Canyon for the first time,” he says. “You sit on your balcony as the fog bounces off the ridge and you look up and up and up at these soaring canyons. It’s overwhelming.”

There is also a smattering of random religious sites: a Buddhist statue on a hill, a small cave with ancient markings, a red pagoda.

“You’d never see this if you only traveled from city to city,” Reggiani says. “There are these amazing things around every bend of the yellow river -- from rock formations to soaring cliffs, crop fields to religious relics.

The boats that cruise the Yangtze are not your typical ocean-going vessels but smaller, quieter ships designed to sail intimate groups of passengers in and out of the coves and ferry them onshore to the villages.

“Because the ships are small it takes no time to get on and off, making shore excursions very accessible,” Reggiani says. “You don’t want to spend all your shore leave onboard so it’s nice that you can climb a few steps and be exploring the land.”

YMT Vacations relies on Victoria Cruises ships, known for being more passenger-friendly than the sea cruises most of us are familiar with.

“The staterooms are large, almost double the size of ocean cruiseships’,” Reggiani says, “and they feature full baths with tubs. Plus, there are three meals a day, events at night and shore excursions with knowledgeable tour directors -- all included in the YMT vacation price.”

Take a cruise in China

Three nights to cruise the Yangtze cruise is just one of the experiences that await travelers on YMT Vacations’ Legendary China & Yangtze River Cruise.

This 12-day land and river itinerary also features a variety of Far East adventures -- from the Forbidden City to The Great Wall of China, the Terra Cotta Warriors at Xi’an to Shanghai’s French Concession.