The Wild West as You’ve Always Imagined It: What to See in Monument Valley 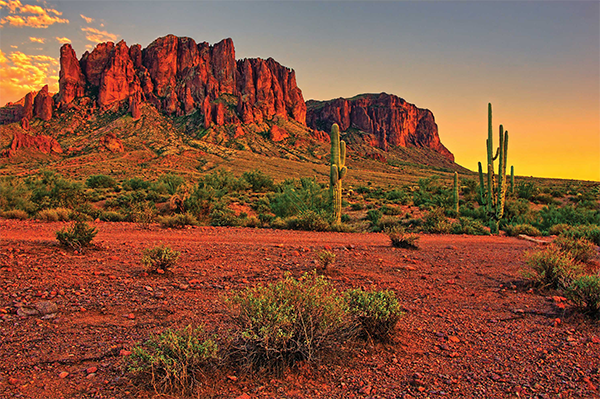 If you’ve ever seen a John Wayne western, chances are you have a pretty good idea of what Monument Valley is like. As the backdrop to dozens of classic films and television series, the stark desert landscape of wind-sculpted buttes and red-rock monoliths has become an unmistakable symbol of the American west.

As part of the Navajo Tribal Park, this other-worldly landscape sits at the heart of the council lands on the border of Northern Arizona and Southern Utah. With rugged mesas and sandstone rock formations that soar to 1,000 feet above the desert floor, it is one of the most photographed places on the planet and a natural wonder millions of years in the making. Here is our insider’s guide to visiting Monument Valley:

Valley Drive -- Monument Valley was born from sediment that raised the basin floor until it became a plateau. Eventually the earth was chipped away by millions of years of water and wind erosion to create the natural art that exists today. You can see some of the best sites along a 17-mille dirt road that begins at the visitor’s center and skirts passed features like Mitten Buttes, Three Sisters, North Window, and Totem Pole, a razor-thin, 500-foot natural tower.

Navajo-Guided Jeep Tours -- It is believed that ancestral spirits linger over this rugged landscape, and what better way to experience this sacred place than with a native guide? You’ll go off-the-beaten-path to 11 different scenic viewpoints, all while understanding the historical, cultural and spiritual significance of these tribal lands.

Wildcat Trail -- This 4-mile-loop hike takes you into one of the most scenic areas of the valley. Step back in time to a land before steeples and skyscrapers, when soaring rock buttes and sandstone sculptures were the only things piercing the sky. This self-guided tour offers world-class vistas and is an unforgettable experience.

Goulding’s Trading Post Museum -- Besides a fascinating look at the film and cultural legacy of Monument Valley, Goulding’s also offers up a pretty good Navajo Taco and a chance to chat with a local guide.

Stargazing -- If you happen to be in the park when the sun slips below the horizon, pull over to the side of the road for what is arguably the best show you’ll ever see. In the stillness and solitude of the mesas and canyons, peer into the night sky and trace the Milky Way across the frontier. It’s a light show like no other.

Monument Valley is just one of the stops on YMT Vacations’ National Parks of the Golden West Tour. This 14-day journey takes you to some of America’s favorite landmarks -- from the Grand Canyon to Zion, Arches to Yosemite. Along the way you’ll journey to picturesque Capitol Reef and Cayonlands as well as Salt Lake City and Las Vegas. To make your plans to join the journey, call your travel consultant or YMT Vacations at 1-888-756-9072.