Things to Do While Traveling Through Ring of Kerry, Ireland

Driving the Ring of Kerry is as essential to an Irish vacation as enjoying a pint of Guinness down the pub. This 111-mile loop winds its way through much of the Emerald Isle’s best coastal scenery.

It meanders through Country Kerry’s the Iveragh Peninsula in Ireland’s rugged southwest. You will drive past lakes, castles, tiny villages, and ancient ruins—highlighting the brilliance of the tiny island in technicolor green.

How to Travel the Ring of Kerry

The other common choice is to rent a car and take the Ring of Kerry at your own pace. The freedom will allow you to spend as much time as you like at each site, and to stray from the beaten path to less popular but perhaps more personally interesting sections. County Kerry is an attraction in itself, especially for outdoor enthusiasts like bicyclists, hikers, and surfers.

All tour buses travel counterclockwise on the Ring of Kerry. If you drive on your own, you can travel clockwise or counterclockwise. Traveling counterclockwise may take longer, as you can get stuck behind slow-moving tour buses. The clockwise route, meanwhile, presents the challenge of passing these same large tour buses on narrow two-way roads. Neither option is better, and whichever route you take, the views promise to be stunning.

Best attractions along the Ring of Kerry

Travelers can rush through the Ring of Kerry in as few as three hours. But we highly discourage taking the Ring of Kerry at a run. This is a place to savor. Stop early, stop often. Take in the glorious nature, thousands of years of history, and friendly atmosphere of this breathtaking spit of land that is part of Ireland’s Wild Atlantic Way.

These are just a few of our favorite stops along the way: 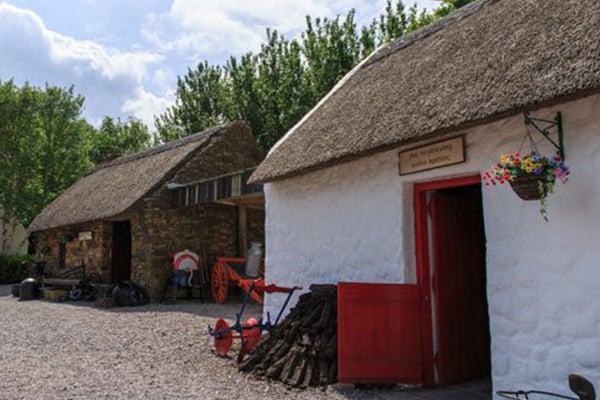 Of particular interest to visitors whose blood runs green is the Kerry Bog Village Museum which takes guests back in time to Ireland in the 1800s. The nation’s rural history comes to life with authentic thatched cottages and antique farming equipment. Learn about the challenges and triumphs of the hearty people that resided in and around Ireland’s peat bogs, who farmed the wetlands for fuel.

Humans weren’t the only ones to call the bogs home. Visitors to the museum will have the chance to meet both the towering Irish wolfhounds and the wee Kerry Bog Ponies. Historically called “hobbies,” these tough little plugs are clever, gentle, and strong. 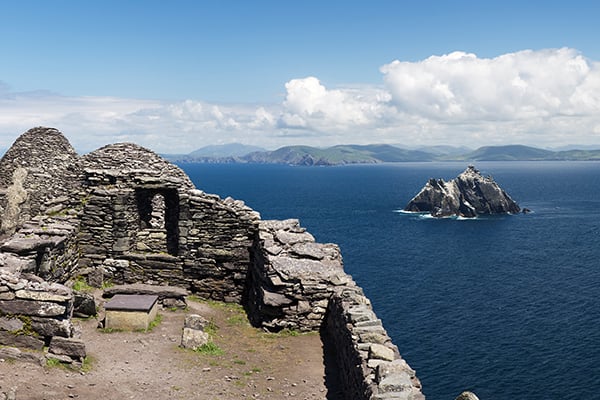 The Skellig islands are a pair of tiny rocky islands 10 miles off the coast of Portmagee. The larger of the two, Skellig Michael, was the site of an ancient Gaelic monastery. The main monastery housed up to 12 monks at a time, hundreds of hand-hewn stone steps above the sea at the top of Skellig Michael’s perilous south peak. The monks lived in unusual beehive shaped stone formations, whose exceptionally preserved ruins are now a protected UNESCO world heritage site.

Derrynane is a tiny village right on the water, with a long sandy beach and numerous historical sites. Derrynane Abbey was built in the sixth century, and its ruins are some of the most picturesque in coastal Ireland. It holds the remains of a stone church and windswept graveyard, which for centuries have enjoyed a view over the edge of a lush hillside of the sea below.

Derrynane is also the home of Derrynane House, where Daniel O’Connell was born in 1775 and spent much of his adult life. A beloved figure across Ireland, he was known as “The Liberator” for his lifelong efforts for the rights of all Irish, inclusive of both Protestants and Catholics. 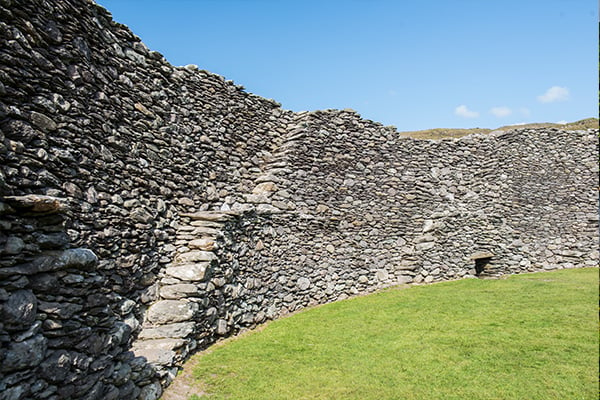 Built of interlocking stone during the Iron Age, is one of the most impressive and best-preserved stone ring forts in Ireland. At 18 feet high, 13 feet thick, and 90 feet in diameter, it is one of Ireland’s largest and (still) most intimidating stone ring forts.

Its past is quite murky; it was built by an unknown local king who used it as a defensive stronghold around 0 BC. 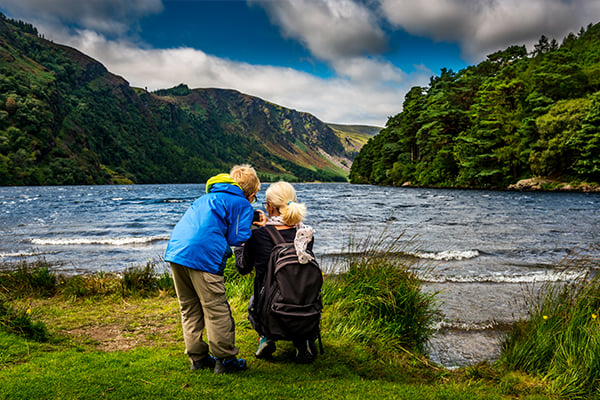 No journey through the Ring of Kerry can be complete without the requisite stop at Ladies View.

This viewpoint is one of the crown jewels of the Ring. It has sweeping views deep into Killarney National Park’s mountains and row of three dazzling lakes. It was named after Queen Victoria’s ladies-in-waiting, who were bewitched by the sight in 1861 during a goodwill tour with the queen. Ladies View is one of the most famous and most photographed spots in Ireland. Take your time as there are few prettier places in the world.

Visit the Ring of Kerry with YMT Vacations

If traveling the Ring of Kerry loop in Ireland appeals to your sense of adventure, why not join YMT Vacations for a guided visit and some great craic? One of our most popular tours, Best of Ireland takes guests to all of the Emerald Isle’s greatest hits, including the Ring of Kerry, Dublin, the Waterford Crystal Factory, and the Cliffs of Moher.

In addition, our Irish tour guides offer an unparalleled experience. Touched with the gift of the gab and exceptionally knowledgeable, these experienced guides share their passion for their country with each guest. Call your travel consultant or YMT Vacations at 1-888-756-9072.