To Beat the Band: The Sounds of the 130th Tournament of Roses Parade 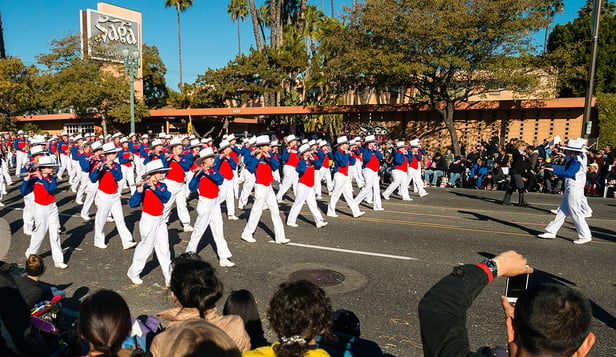 There’s a quiet hush that descends upon the crowds as the shadow of a B-1 Stealth bomber passes over the Tournament of Roses Parade. However, the silence that marks the start of the nation’s favorite parade is quickly broken by the beating of snare drums and blaring trumpets. On January 1, 2019, the parade will again set off down Pasadena's Colorado Boulevard for the 130th time -- and scoring the event will be 20 of the world’s most-talented marching bands.

From Alabama to Sweden, Hawaii to Japan bands from around the globe have competed for one of the coveted slots. The winners are chosen based on musicianship, marching ability, entertainment and special interest value. Recently, volunteer members of the Tournament of Roses selected next year’s participants. The early decision gives the organizations time to fundraise and garner support for the trip.

These spirited, high-stepping bands have long been an important part of the parade. In fact, the Monrovia Town Band was the first musical group to perform in the parade back in 1891. Since then a number of bands have become staples of the event with long-standing arrangements that guarantee their participation: the Official Honor Band hosted by Pasadena City College, the Los Angeles Unified School District Honor Band, the Salvation Army Marching Band and the United States Marine Corps West Coast Composite Band. Joining the lineup will also be the bands from the universities competing in the 105th Rose Bowl Game.

In addition to marching in the five-and-a-half-mile parade, the bands will also perform in Bandfest. Over the course of two days each group, along with its auxiliary performers, will present their halftime show in a ‘battle of the bands’ held on the field of Pasadena City College.

You can experience the Tournament of Roses Parade on five exclusive YMT Vacations journeys. Choose from the classic 5-day Rose Parade & Los Angeles Tour, or extend your travels to California’s coast, the Grand Canyon and even on a cruise through the Panama Canal!


To make your plans to see the parade, which includes VIP Grand Stand seating and a behind-the-scenes tour of the legendary floats in the making, contact your travel professional or call YMT Vacations at 1-888-756-9072.