Traveling the Danube: Top Things to Do in Melk, Austria 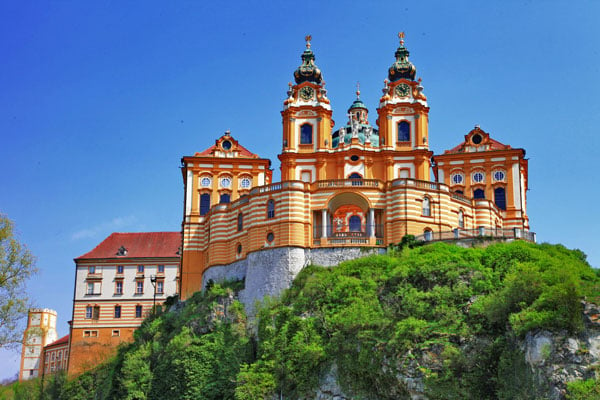 Perched high above a bend in the Danube where the river enters the Wachau Valley is the quaint Austrian village of Melk. Home to a massive Benedictine Abbey, this small town grew in importance thanks to a lively market and a spectacular location along the riverbank. Today, the port city offers plenty of charm and a myriad of ways to spend a lazy summer day. Stroll the pedestrian walkways of the city center or linger over lunch in an outdoor cafe. Bike along the meandering waterway or explore the grand Baroque abbey. Here are just some of the top things to do in the Austrian town of Melk:

The Melk Abbey — The Abbey Church is considered to be the finest Baroque church north of the Alps. It is famous for its twin towers, 18th century ceiling paintings, ornate choir stalls and magnificent high altar. Arguably the most important monastic house in Austria, this former castle is made up of various buildings that encircle seven courtyards. The complex is known for being almost palace-like with ornate rooms, staircases and paintings. Make sure to see the Imperial Rooms that house the abbey’s museum, the Marble Hall and the Baroque Garden Pavilion. If you’re lucky enough to visit during one of the regular organ recitals, make sure to add that to your list of things to do.

Old Town Melk — In the shadow of the Benedictine Abbey is the Old Town of Melk. Explore the Town Hall Square and the winding city streets. Make time to see the House for Itinerants with its finely painted windows as well as the town’s coat of arms on the Rathaus. There’s also the charming old abbey tavern that dates back to 1736, the shipmaster’s house with its spectacular river views, and the old post office that now houses a local museum.

Schloss Schallaburg — Considered the most important piece of Renaissance architecture in lower Austria, the Schloss Schallaburg is best known for its magnificent two-story arcaded courtyard and rich terracotta decorations. There are elegant cantilevered staircases and terracotta reliefs depicting mythological characters. Afterwards, be sure to stroll among the flowerbeds and orchards of the lovely castle gardens.

Scloss Schonbuhel — On a craggy outcropping that stretches out over the Danube, this 12th century castle is a blending of multiple renovations. Highlights include a relief of The Last Supper and the Rosalien Chapel. After exploring the grounds, make sure to visit the quaint market town that sits just below the castle.

The Wachau Valley — Where the Danube cuts a narrow valley between the foothills of the Bohemian Forest and the Dunkelsteiner Wald is the Wachau Valley. The area is known for its ancient towns, historic castles and crumbling ruins. Drawn by its stunning scenery, this stretch of the Danube has long been a favorite of travelers. In fact, as early as the eighteenth century, the area had numerous inns and 31 monasteries in operation.

YMT Vacations invites you to join us on the Elegant Danube, Alpine Beauty & Bohemian Highlights river cruise tour. This 14-day land tour and river cruise sets sail along the picturesque Danube River and straight into the heart of Old World Europe. Wander amidst ancient castles and through a basilica where Liszt once played. Take a soak in the thermal spas of Budapest and sip a stein of beer as you dance along to the lively tunes of Oktoberfest. To join this unforgettable journey, call your travel consultant or YMT Vacations at 1-888-756-9072.