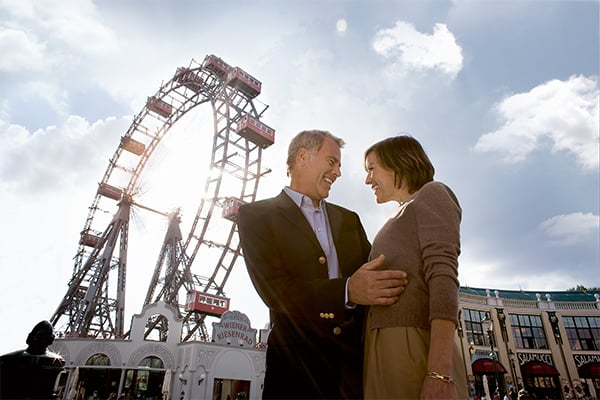 Visitors to Austria can check out the Prater amusement park in Vienna and ride the Giant Ferris Wheel—known as the Wiener Riesenrad in German—for a breathtaking view of Austria’s capital city and the glorious Danube River. The Prater is a historic fairground in the center of Vienna with walking paths, sporting facilities, numerous dining options, and rides, including the not-to-be-missed Ferris wheel. The Pater Ferris Wheel is one of Vienna’s most popular tourist attractions and is a symbol of the city for many.

The History of Wiener Riesenrad

Visitors who decided to take a ride on the Prater Giant Ferris Wheel, which is located near the park’s entrance, will be given a brief history of the ride and the city before they board. The nearby Panorama Museum covers the history of the Prater, dating back to Roman times, in an exhibit set up in 8 full-size replica Ferris wheel cabins.

The Giant Ferris Wheel was built in 1897 for the 50th anniversary of Emperor Franz Joseph’s reign, and was rebuilt in 1945 after being nearly destroyed during the Second World War. It was rebuilt with 15 cabins, fewer cabins than the original 30 it was designed to hold. At 212 feet, it was the tallest Ferris wheel in Europe for years—a crown now worn by the 443 foot London Eye. In addition, the world’s oldest operating Ferris wheel was heavily featured in a number of classic movies, including Orson Welles’ “The Third Man,” “Before Sunrise” with Ethan Hawke and Julie Dempsy, and of course in Timothy Dalton’s first pass at James Bond in “The Living Daylights.” 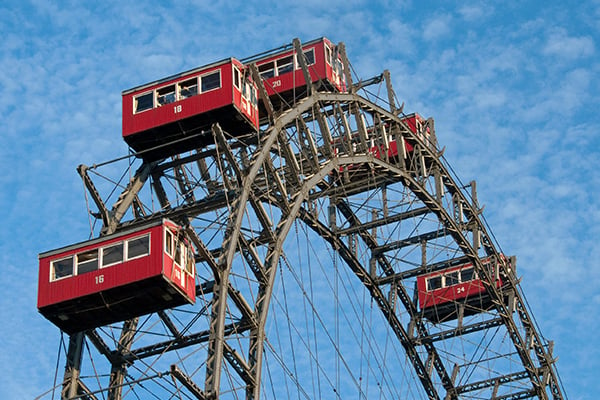 You can visit the Wiener Riesenrad year-round, save for a few days in January and on certain holidays. Always double-check before you visit to make sure that the wheel is open the day you plan to visit the park—and be aware that the rest of the Prater amusement park is only open from mid-March through Halloween.

Every night, the Prater Ferris Wheel lights up, spectacularly illuminating the Vienna skyline. It is a stunning sight to behold from the ground, and visitors whose schedule allows, should not miss the opportunity to appreciate the Wiener Riesenrad and the “City of Dreams” from this incredible vantage point. All rides last between 10-15 minutes, and the wheel spins slowly so guests have plenty of opportunities to take pictures of the breathtaking views over Vienna during the daytime or evening hours.

The Prater Giant Ferris Wheel is a true icon of this magnificent city. It is the only surviving wheel from its time, has a rich history, and gives guests the chance to see the city of Vienna in a whole new way. Visit the Giant Ferris Wheel when you stop in Vienna on YMT’s Elegant Danube River Cruise & Tour or Elegant Central Europe tour. Call your travel professional or YMT Vacations at 1-888-756-9072 to book!