Wildlife and Animals in Iceland You Might See on Your Trip 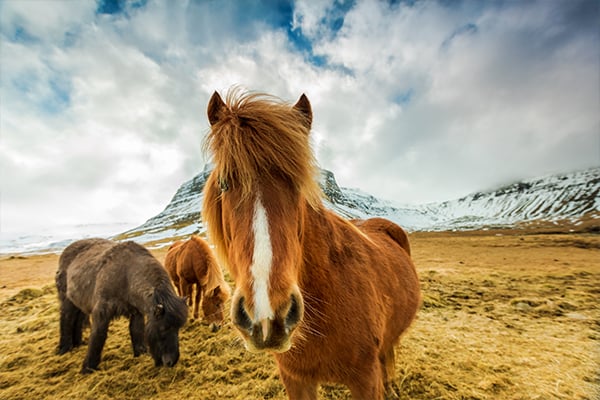 Known as the land of fire and ice, Iceland has one of the world’s most rugged landscapes.

This Nordic nation renowned for its volcanoes, geysers, hot springs, lava fields, glaciers, and sparse population isn’t often celebrated for its wildlife—but we think it should be.

Whether as the result of evolution or centuries of careful breeding, Iceland’s native animals are a hearty bunch that have uniquely adapted to the inhospitable landscape. These locals are fascinating survivors, and while we can’t guarantee you’ll see them, we can promise that the more you learn about them, the more you’ll want to spot them in the wild.

Here are a few of our favorites that you just might see on a visit to Iceland: 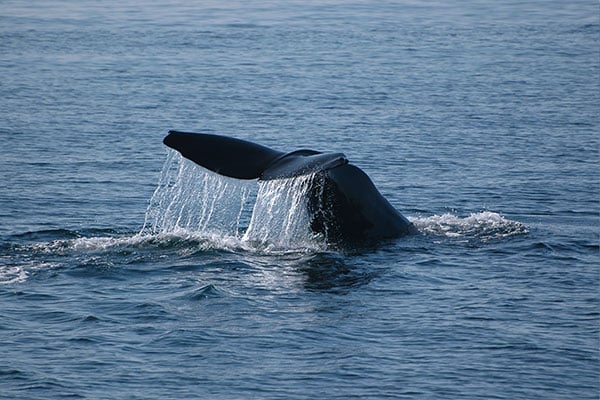 At a length of up to 67 feet, and weighing in at a whopping 65 tons, the sperm whale is the largest toothed mammal in the history of the world… and is frequently found in Iceland’s frigid North Atlantic waters.

These massive creatures can live up to 70 years, surviving on a diet of squid (including the giant squid, who often leave sperm whales with circular scars in the exact shape of the 2” long suckers lining their tentacles) and various other fish.

While Herman Melville’s classic novel Moby Dick largely centers on a man-eating, boat smashing, albino sperm whale standing as an allegory for the very concept of chaos, these creatures are actually not very dangerous to people. They spend most of their lives deep underwater—they can dive to 3,000 meters—and are quite shy when up at the surface. Sperm whales are often seen from ships and off Iceland’s coast in the spring and summer.

As big as a house cat and ranging in color from pure white to brownish-black, the petite yet powerful Arctic fox is Iceland’s only native land mammal.

The fox initially crossed into the isolated island during the last ice age thousands of years ago, and has had the run of the place ever since. Iceland’s sparse vegetation makes survival a challenge, but the plucky omnivore makes do on berries, shrubs, birds, seal pups, and eggs.

Their body contains far more fat and much thicker fur than a raccoon, another cuddly looking yet decidedly unfriendly 6-20 pounder, which enables the fox to make it through Iceland’s harshest winters. 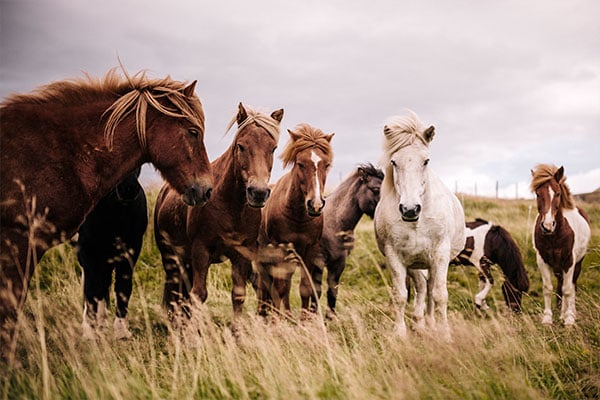 Icelandic horses are renowned for their easy-going nature and small stature—ponies in size, towering Clydesdales in spirit, this beloved local breed is the pride of Iceland. Horses were brought to Iceland from continental Europe by Norse settlers between the 9th and 10th century, and have been selectively bred on the island ever since, resulting in a hearty strain of horse that thrives in the unforgiving environment.

Icelandic Horses are highly protected—other breeds of horse are not allowed on the island, and once a horse goes abroad, she is not allowed back. This prevents disease and ensures the breed maintains its hard-won purity. 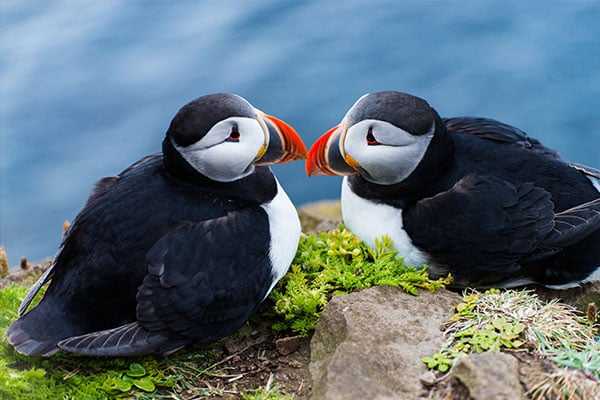 As formally dressed as penguins, and as brightly beaked as toucans, the puffin is one of the most striking birds in the world—and the planet’s largest colony can be found on Iceland’s dramatic sea cliffs.

These small birds have a short wingspan, which makes flying a labor-intensive activity. Despite this, they’re quite capable in the air, but more importantly, they’re masters of underwater agility. Puffins’ wings make them exceptional swimmers, acting as powerful, compact flippers when puffins dive into the icy Atlantic.

Puffins are mostly monogamous, and both parents participate in feeding fresh caught fish to their young pufflings.

You can visit Iceland on YMT Vacations’ Enchanting Iceland Tour or Iceland & Northern Europe Cruise. These tours includes an unforgettable stay in Iceland, including a dip in the breathtaking Blue Lagoon.